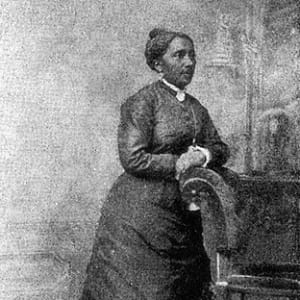 Elizabeth Jennings Graham won a lawsuit against New York’s Third Avenue Railway Company for ejecting her from a streetcar in 1854 because she was African American.

Elizabeth Jennings Graham challenged segregation on public transportation in 1854, a full 100 years before Rosa Parks did so. At the time, African American riders were only allowed to ride on New York City streetcars if no white passengers protested. When Jennings refused to disembark from a streetcar, a conductor and police officer forcibly removed her. She sued the streetcar company and won.

Elizabeth Jennings (Graham) was born either in 1826 or 1830. (Sources differ on the year, and there is no record of the month or day.) Her parents, Thomas and Elizabeth, were middle class and active in New York’s African American community, and some sources say her father was involved with the abolitionist movement. Elizabeth grew up greatly involved with her church, where she played the organ.

On July 16, 1854, Elizabeth Jennings (she wasn’t married yet) and her friend Sarah Adams boarded the Third Avenue streetcar to go to church. When the conductor told the two women to get off, Elizabeth Jennings refused. The conductor tried to remove her physically, but she resisted, first holding onto a window and then holding onto the conductor’s jacket. It was not until a police officer joined the fray that the two white men managed to push Jennings off the streetcar and onto the street. Clothes in ruins, she was sore and injured.

She was also outraged by such disgraceful treatment, and decided to take action. Jennings wrote about her experience, and her letter was published by abolitionist Frederick Douglass and by Horace Greeley in the New York Tribune. In the letter, she described how the conductor had tried to remove her and how the police officer “without listening to anything I had to say thrust me out and tauntingly told me to get redress if I could.”

And so she did. Her fellow church members held a rally the next day to protest the violence with which the conductor and the police treated her. She also filed a lawsuit against the Third Avenue Railway Company. Her lawyer was the young Chester A. Arthur, who went on to become President of the United States. Jennings won the case and was awarded $225 in damages. The National Anti-Slavery Standard newspaper praised the decision that African Americans were “upon an equality with all others.”

Despite another successful suit against the company just a month later, it took another 20 years to end segregation on New York’s streetcars.

Elizabeth Jennings Graham had always been a teacher. Starting in 1895, she established a kindergarten for African American children in her home. She continued to run the school until she died on June 5, 1901. She is buried in Brooklyn, New York.