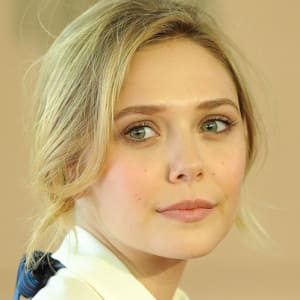 Elizabeth Olsen is an American actress and the younger sister of Mary-Kate and Ashley Olsen. She’s also known for her critically acclaimed role in ‘Martha Marcy May Marlene’ and for playing the Scarlet Witch in the ‘Avengers’ franchise.

Who Is Elizabeth Olsen?

Born in Sherman Oaks, California, in 1989, Elizabeth Olsen grew up in the entertainment business as the younger sister of actresses Mary-Kate and Ashley Olsen. She first worked as an actress in her sisters' films as a child, and was in her 20s when she first began to develop her own film career, appearing in such movies as Silent House and Peace, Love & Misunderstanding (both in 2011). That same year, Olsen had a career breakthrough with her critically acclaimed role in the film Martha Marcy May Marlene. Since then, she has appeared in several more dramas, including Kill Your Darlings (2013), and in the huge international blockbusters Godzilla (2014) and Avengers: Age of Ultron (2015).

Aside from famous older sisters and twins Mary-Kate and Ashley, Olsen has an older brother Trent and two half siblings.

Olsen has a net worth of $5 million, according to Celebrity Net Worth.

By the time she graduated from Tisch in 2011, Elizabeth Olsen had appeared in several films — most notably Silent House, Martha Marcy May Marlene and Peace, Love & Misunderstanding, which provided her first three major roles. Silent House and Martha Marcy May Marlene premiered at the 2011 Sundance Film Festival, though only the latter movie was entered into competition.

Olsen's performances led many critics to deem her the festival's breakout star that year, especially for her work in Martha Marcy May Marlene. According to Olsen, she fell in love with that project because "the audience takes the point of view of my character, Martha. They will see what's the present and what's the past through flashbacks. So what happened to her [in a cult] is slowly revealed, but what's happening in the present is for the audience to decide whether it's real or whether it's a paranoia."

Silent House, a remake of an Uruguayan horror film, was shot in a single take, and was thus particularly suited to Olsen's theater background. In Peace, Love & Misunderstanding, Olsen portrayed the daughter of actress Jane Fonda's character.

Olsen appeared in two films in 2012: Red Lights (with Robert De Niro) and Liberal Arts (with Josh Radnor and Zac Efron). The following year, she co-starred with Dakota Fanning in the drama Very Good Girls and appeared alongside Daniel Radcliffe in Kill Your Darlings. She was also a lead player in the period drama In Secret, playing the Emile Zola character Thérèse Raquin, and the grim thriller Old Boy.

"I've been training in theater and dance since I was a kid, so being in front of a camera was really the most frightening thing," Olsen said of her early acting career, adding that she looks forward to continuing her on-screen work for the foreseeable future. "I hope I will be able to do stage and film work — I really love it all."

Olsen has continued to forge ahead with her screen career in a major way. In 2014 she was featured in the international blockbuster remake Godzilla and the following year was seen in another mega-picture, Avengers: Age of Ultron, which went on to earn more than $1.4 billion worldwide. In Ultron, Olsen portrayed Wanda Maximoff, aka the Scarlet Witch, a super-powered being with the ability to affect individual perceptions of reality. And in a casting twist of fate, British actor Aaron Taylor-Johson starred opposite Olsen in both Godzilla and Ultron, playing her husband in the former film and her brother in the latter. In 2018 Olsen reprised her role as the Scarlet Witch in Avengers: Infinity War.

Olsen played Audrey Williams, the first wife of iconic singer-songwriter Hank Williams, in the biopic I Saw the Light, which was written and directed by Marc Abraham and premiered at the Toronto Film Festival in 2015. She starred opposite Tom Hiddleston, who played Hank Williams.

Actress Elizabeth Chase Olsen was born on February 16, 1989, in Sherman Oaks, California, the third daughter of David Olsen, a mortgage banker, and Jarnie Olsen, a manager. Olsen's older twin sisters are actresses/entrepreneurs Mary-Kate and Ashley Olsen, who first gained fame on the family sitcom Full House. Elizabeth, nicknamed "Lizzie," began acting at a very young age, with appearances in her sisters' films. Before the age of 11, she had landed small roles in How the West Was Fun, Our First Video and the straight-to-video series The Adventures of Mary-Kate and Ashley.

Of her acting career and relationship with her sisters during this period, Olsen said, "Well, that was like after-school for me. I'd hang out and they'd be like, 'Hey, you want to be in this one?' Then they'd paint half my face dark brown or something — 'Silly sister, forgot to put sunscreen on half her face.'"

Olsen attended Campbell Hall School in North Hollywood, California, from kindergarten through grade 12. Following her high school graduation, she enrolled at New York University's Tisch School of the Arts. In 2009, she spent a semester studying in Russia at the Moscow Art Theatre School. "I've been taking acting classes since I was 7," the actress later said. "I took classes, kids auditioning with their mothers, and I didn't want that, I just liked the classes. I met my agent through understudying a Broadway play, and I was doing some underground stuff that nobody saw."