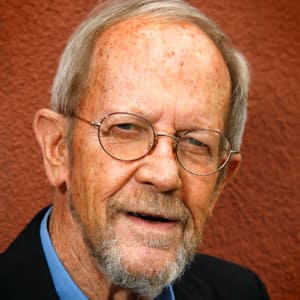 Elmore Leonard was an American novelist best known for writing crime novels and Westerns, many of which have been made into popular films, including Out of Sight, Get Shorty and 3:10 to Yuma.

Born in Louisiana in 1925, Elmore Leonard was inspired by Remarque's All Quiet on the Western Front. Leonard's determination to be a writer stayed with him through a stint in the U.S. Navy and a job in advertising. His early credits include mostly Westerns, including 3:10 to Yuma. When that genre became less popular, Leonard turned to crime novels set in Detroit, Michigan, including Get Shorty, Jackie Brown and Out of Sight. The prolific writer died in Detroit on August 20, 2013, at age 87.

Famed Western/crime novelist Elmore John Leonard Jr. was born on October 11, 1925, in New Orleans, Louisiana. The early part of Leonard's youth was largely defined by his family's constant moves, which were the result of his father's job as a site locator for General Motors. Not long after his 9th birthday, however, Leonard's family found a permanent home in Detroit, Michigan.

It was in Detroi that Leonard got hooked on a serialization of the Erich Maria Remarque novel All Quite on the Western Front in the Detroit Times. The book became an inspiration for Leonard, who decided he wanted to try fiction writing as well. He wrote his first play that same year, when he was in fifth grade, and would go on to write for his high school paper.

After graduating from high school in 1943 and serving three subsequent years in the U.S. Navy, Leonard returned home and enrolled at the University of Detroit. As a college student, he pushed himself to write more, and graduated in 1950 with a dual degree in English and philosophy.

Still an unknown, however, Leonard didn't have the means to strike out on his own as a writer. Instead, he found work with an advertising agency, using his off time to draft stories—many of them Westerns.

Elmore Leonard's first big break as a fiction writer came in December 1951, when one of his short stories, "Trail of the Apache," was published in Argosy Magazine. Three years later, he published his first novel, The Bounty Hunters (1954); the work drew both commercial and critical praise, with The New York Times labeling it a "good" first novel.

Other Westerns soon followed, including 3:10 to Yuma and The Captives, both of which were adapted for film. Leonard continued to create Westerns throughout the rest of his decades-long career; by the time of his death in 2013, he had published more than 30 works belonging to the genre.

Earning Acclaim as a Fiction Writer

When the popular demand for Westerns waned in the 1960s, Leonard focused on a new genre: crime. With stories often set against the gritty background of his native Detroit, Leonard's crime novels, complete with rich dialogue and flawed central characters, earned the writer a group of dedicated readers.

It wasn't until the 1980s, however, that Leonard truly became a star. The man who never got enough publicity buzz, according to his fans, was suddenly appearing everywhere. In 1984, he landed on the cover of Newsweek under the label the "Dickens of Detroit."

Hollywood came calling shortly after, and many of Leonard's novels were adapted into movies, including the crime smashes Get Shorty and Jackie Brown.

Leonard spent his later years in Oakland Country, Michigan. The prolific writer died on August 20, 2013, at the age of 87, in Bloomfield Village, Detroit, Michigan. He was survived by his third wife, Christine Kent, and five children.