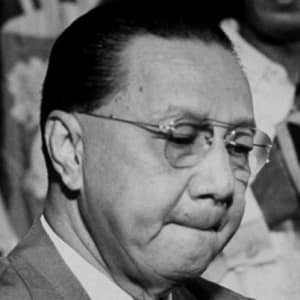 Elpidio Quirino (1890–1956) was the second president of the Independent Republic of the Philippines.

Born in 1890, Elpidio Quirino was elected to the Philippine Congress in 1919. He was part of the independence mission to Washington that freed the Philippines from American control in 1934. He then served as vice president under Manuel Roxas, becoming president upon Roxas' death in 1948. For six years, Quirino oversaw postwar reconstruction, but his administration suffered from corruption.

Elpidio Quirino was born on November 16, 1890, in the small city of Vigan, on Luzon Island in the Philippines. His father, Don Mariano Quirino, was a warden at a provincial jail. His mother was Dona Gregoria Mendoza Rivera Quirino. Young Elpidio graduated from elementary school in nearby Caoayan. Advanced beyond his years, Elpidio became a barrio (rural village) teacher while studying at Vigan High School.

In April 1942, the Philippines were captured by Japanese imperial forces. Elpidio Quirino refused to join the Japanese-sponsored “puppet government” of Jose Laurel and instead went underground. He was captured by Japanese military police and imprisoned. His wife, son and two daughters were killed by Japanese forces as they fled their home during the Battle of Manila in early 1945.

After the war, Elpidio Quirino became the leader of the majority Liberal Party and president pro tempore of the Senate. Anticipating the country’s impending independence, elections were held in April 1946, and Manuel Roxas was elected president, with Quirino as vice president. When President Roxas unexpectedly died in April 1948, Quirino became president. When he took office, Quirino had two goals: reconstructing the nation and restoring the faith and confidence of the people. However, Quirino soon faced impeachment, instituted by members of the rival Nationalist Party. Charges ranged from nepotism to misappropriation of funds, but after several months, he was exonerated of all charges.

Elpidio Quirino was reelected president in November 1949, under suspicion of widespread election fraud and intimidation. As president, he attempted to improve social, economic and agrarian conditions. He also established relations with Western and Asian countries. Quirino’s administration faced a serious threat from the Communist-led Hukbalahap (Huk) movement. Quirino appointed Defense Secretary Ramon Magsaysay to suppress the insurrection. Although successful to a degree in these areas, Quirino failed to act aggressively in implementing many of the needed reforms. Further, Quirino was often justly accused by Filipino nationalists of placing American interests above Filipino ones. The Huk rebellion wasn’t suppressed until 1954, under Quirino’s successor Ramon Magsaysay.

Elpidio Quirino ran for reelection in 1953 despite his poor health. Defense Secretary Ramon Magsaysay angrily resigned over Quirino’s alleged corruption and joined the opposition Nationalist Party. He would go on to defeat Quirino in the general election. Elpidio Quirino retired to private life and died of a heart attack in February 29, 1956.