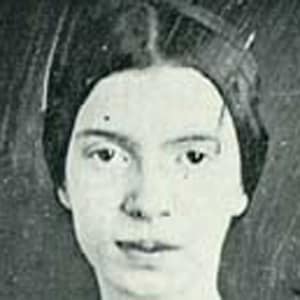 Emily Dickinson was a reclusive American poet. Unrecognized in her own time, Dickinson is known posthumously for her innovative use of form and syntax.

Who Was Emily Dickinson?

Born on December 10, 1830, in Amherst, Massachusetts, Emily Dickinson left school as a teenager, eventually living a reclusive life on the family homestead. There, she secretly created bundles of poetry and wrote hundreds of letters. Due to a discovery by sister Lavinia, Dickinson's remarkable work was published after her death—on May 15, 1886, in Amherst—and she is now considered one of the towering figures of American literature.

Emily Elizabeth Dickinson was born on December 10, 1830, in Amherst, Massachusetts. Her family had deep roots in New England. Her paternal grandfather, Samuel Dickinson, was well known as the founder of Amherst College. Her father worked at Amherst and served as a state legislator. He married Emily Norcross in 1828 and the couple had three children: William Austin, Lavinia Norcross and middle child Emily.

An excellent student, Dickinson was educated at Amherst Academy (now Amherst College) for seven years and then attended Mount Holyoke Female Seminary for a year. Though the precise reasons for Dickinson's final departure from the academy in 1848 are unknown; theories offered say that her fragile emotional state may have played a role and/or that her father decided to pull her from the school. Dickinson ultimately never joined a particular church or denomination, steadfastly going against the religious norms of the time.

Dickinson began writing as a teenager. Her early influences include Leonard Humphrey, principal of Amherst Academy, and a family friend named Benjamin Franklin Newton, who sent Dickinson a book of poetry by Ralph Waldo Emerson. In 1855, Dickinson ventured outside of Amherst, as far as Philadelphia, Pennsylvania. There, she befriended a minister named Charles Wadsworth, who would also become a cherished correspondent.

Among her peers, Dickinson's closest friend and adviser was a woman named Susan Gilbert, who may have been an amorous interest of Dickinson's as well. In 1856, Gilbert married Dickinson's brother, William. The Dickinson family lived on a large home known as the Homestead in Amherst. After their marriage, William and Susan settled in a property next to the Homestead known as the Evergreens. Emily and sister Lavinia served as chief caregivers for their ailing mother until she passed away in 1882. Neither Emily nor her sister ever married and lived together at the Homestead until their respective deaths.

Dickinson's seclusion during her later years has been the object of much speculation. Scholars have thought that she suffered from conditions such as agoraphobia, depression and/or anxiety, or may have been sequestered due to her responsibilities as guardian of her sick mother. Dickinson was also treated for a painful ailment of her eyes. After the mid-1860s, she rarely left the confines of the Homestead. It was also around this time, from the late 1850s to mid-'60s, that Dickinson was most productive as a poet, creating small bundles of verse known as fascicles without any awareness on the part of her family members.

In her spare time, Dickinson studied botany and produced a vast herbarium. She also maintained correspondence with a variety of contacts. One of her friendships, with Judge Otis Phillips Lord, seems to have developed into a romance before Lord's death in 1884.

Dickinson died of kidney disease in Amherst, Massachusetts, on May 15, 1886, at the age of 55. She was laid to rest in her family plot at West Cemetery. The Homestead, where Dickinson was born, is now a museum.

Little of Dickinson's work was published at the time of her death, and the few works that were published were edited and altered to adhere to conventional standards of the time. Unfortunately, much of the power of Dickinson's unusual use of syntax and form was lost in the alteration. After her sister's death, Lavinia Dickinson discovered hundreds of poems that Emily had crafted over the years. The first volume of these works was published in 1890. A full compilation, The Poems of Emily Dickinson, wasn't published until 1955, though previous iterations had been released.

Emily Dickinson's stature as a writer soared from the first publication of her poems in their intended form. She is known for her poignant and compressed verse, which profoundly influenced the direction of 20th-century poetry. The strength of her literary voice, as well as her reclusive and eccentric life, contributes to the sense of Dickinson as an indelible American character who continues to be discussed today.