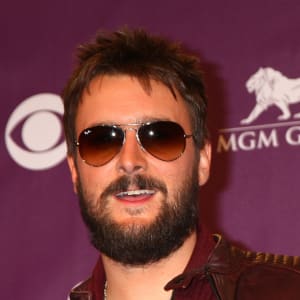 Church has created such country hits as “Drink in My Hand” and “Give Me Back My Hometown.”

Born on May 3, 1977, country singer Eric Church started writing songs and performing as a teenager, and he released his first album, Sinners Like Me, in 2006. His rock-influenced country style really began to catch on with his second album, Carolina (2009), and with Chief in 2011, Church had established himself as a country music star. His latest release is 2014's The Outsiders.

Singer Eric Church was born on May 3, 1977, in Granite Falls, North Carolina, and he took up the guitar at 13 and began writing songs. A natural-born performer, Church had a regular gig at a bar as a high school student and received an offer for a record deal as a teen, but he turned it down. After high school, he attended Appalachian State University as part of a deal he had made with his father: Church earned a degree in marketing in exchange for financial support for a year in Nashville. While still a student, he managed to find time for his music and performed in a group called the Mountain Boys.

After graduation, Church went to Nashville to pursue a career in country music, starting out as a songwriter before landing a record deal in 2006. His first album, Sinners Like Me, came out that same year, and, drawing inspiration from earlier country outlaws like Waylon Jennings, Church showcased his country rock sound on such tracks as "Guys Like Me."

Church also earned a reputation for being a rebel around this time as well, after being fired as the opening act for Rascal Flatts. According to Rolling Stone, Church got axed for playing too long. "We've never been a good opening act," he explained. But Church's loss became Taylor Swift's gain. She replaced him on the tour, which gave her career a huge boost.

Church's career really began to soar with 2009's Carolina. The song "Love Your Love the Most" became his first substantial showing on the charts followed by "Hell on the Heart" and "Smoke a Little Smoke." Church also developed a following with his impressive live shows. As he told Rolling Stone, "When we go out there, I want to be the act that, no matter who's in that crowd, they've never seen a better act than me. I'm gonna empty the tank." Church picked up his first major award the following year when he was named the best new solo vocalist by the Academy of Country Music in 2010.

With 2011's Chief, Church had an even greater success. The album's title comes from his nickname, one that first belonged to his maternal grandfather. Debuting at the top of the country charts, the recording had two No. 1 hits: the good-time anthem "Drink in My Hand" and the nostalgic "Springsteen." Not only a smash with country fans, Chief won Church numerous accolades, such as album of the year honors at the Country Music Association Awards in 2012.

In 2014, Church released The Outsiders, on which he continued to fuse country and rock to make his own distinctive sound. The record featured the hit "Give Me Back My Hometown," a song that won over both fans and critics alike. It has since been nominated for two CMA awards, including song of the year.

Church and his wife, Katherine, have been married since 2008. The couple has one son, Boone, and are currently expecting a second child. They are also the founders of the Chief Cares Fund, which helps children and families in need in Tennessee, North Carolina and other parts of the world. The fund is run by the Community Foundation of Middle Tennessee.