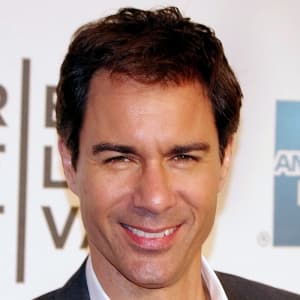 Canadian actor Eric McCormack is best known for the role of Will on the popular sitcom ‘Will & Grace.’

Who Is Eric McCormack?

Actor Eric McCormack had his first taste of TV success in his native Canada with the series Lonesome Dove, which aired in the mid-1990s. He went on to achieve fame and acclaim for his starring role in the popular sitcom Will & Grace from 1998 to 2006. McCormack went on to star in the mystery series Perception, before returning to his best-known role for the 2017 revival of Will & Grace.


Born on April 18, 1963, in Toronto, Canada, Emmy Award-winning actor Eric McCormack may be best known for playing Will Truman on the long-running sitcom Will & Grace. He started acting early on as he explained to Cosmopolitan magazine. “I was the lead in the first-grade play. Then the next year, I just assumed I was a shoo-in for the lead, but I got the minor role of chef.”

McCormack went to study theater at Ryerson University. From there, he honed his craft at the Stratford Festival of Canada from 1985 to 1989. He wasn’t asked back after his last season with the theater group because the director felt McCormack took too modern of an approach to his performances. As he told Back Stage, “I'd been so classically trained, but ultimately my mannerisms were more Woody Allen than Laurence Olivier." He went on to appear on television, starring in the Canadian western series Lonesome Dove, a spinoff from the popular miniseries, in the mid-1990s.


McCormack’s career took off with his role of gay attorney Will Truman on the hit sitcom Will & Grace, which debuted in 1998. The show follows the lives of McCormack’s character and his best friend Grace (Debra Messing). He had some reservations about taking the part, but not because of the sexuality of his character. McCormack worried about committing to another TV series. According to Back Stage, he explained that “I hadn’t read any scripts, and you worry if the show is going to be ‘the one.’”

Luckily for TV viewers, McCormack signed on for Will & Grace. The comic chemistry between McCormack and Messing proved to be dynamite, and the two other lead characters, Will’s friend Jack (Sean Hayes) and Grace’s wayward employee Karen (Megan Mullally), helped form the heart of a hit sitcom. During the run of the show, McCormack received several award nominations and an Emmy Award for his performance. It was a bittersweet goodbye for McCormack when the show wrapped up after eight seasons in 2006.
As he explained to Redbook, he knew that he would miss his cast mates but ending the series also presented him with an opportunity to branch out. “So I've got to get out there and reinvent myself before I'm just Will in everyone's mind forever.”

In 2017, NBC announced that it was reviving Will & Grace with the original cast. That fall, fans discovered that the old chemistry was still there, with McCormack impressing enough to earn a Golden Globe nomination in December.


After the first run of Will & Grace, McCormack has tackled a range of projects. He starred in the short-lived advertising drama Trust Me in 2009 and had a recurring role on the Julia Louis-Dreyfus comedy The New Adventures of Old Christine. In 2012, McCormack began his run as the brilliant yet troubled neuropsychiatrist Daniel Pierce on the criminal drama Perception. He also appeared on Broadway in a revival of Gore Vidal’s The Best Man around this time. In 2015, he starred as Ken Waltham in the series Full Circle and made a guest appearance on his former co-star, Debra Messing’s show, The Mysteries of Laura.


McCormack is married to Janet Holden. The couple met on the set of the TV series Lonesome Dove where she worked as an assistant director. They have one child together, son Finnigan.