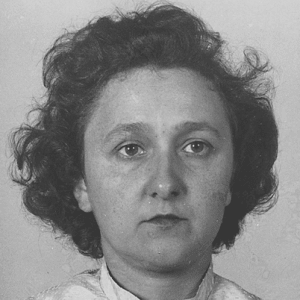 Ethel Rosenberg and husband Julius Rosenberg were convicted of conspiracy to commit espionage in 1951. They were both executed by the U.S. government in 1953.

Born in 1915 in New York City, Ethel Rosenberg went to Seward High School. After finishing school in 1931, she went to work for the National New York Packing and Shipping Company. Rosenberg became involved in a workers' union there and soon became a supporter of the Communist Party. In 1939, she married Julius Rosenberg. The couple had two sons, Michael and Robert. In the 1940s, her husband acted as an agent for the Soviet Union. Shortly after his arrest in 1950, Ethel was brought into custody as a co-conspirator in a plot to give U.S. military secrets to the Soviets. She and her husband were convicted in 1951 and executed in 1953.

Born on September 28, 1915, in New York City, Ethel Rosenberg grew up on the city's Lower East Side. She was the oldest child of Barney and Tessie Greenglass. Her father, an immigrant from Russia, also had a son from an earlier marriage. The family, all crowded together in a tenement apartment, later grew to include two brothers, Bernard and David.

Rosenberg attended Seward Park High School where she had an interest in acting. She appeared in such school productions before graduating in 1931. Rosenberg soon found a job with the National New York Packing and Shipping Company. Through her job, she became involved in social and political causes. It was at a union event that she met Julius Rosenberg. The two began dating, and they each developed a strong interest in the Community Party.

Ethel and Julius Rosenberg married in 1939. The couple eventually had two children together: son Michael was born in 1943, and son Robert was born in 1947.

Ethel Rosenberg's role in one of the most infamous U.S. cases of espionage has remained unclear. Her husband, Julius, reportedly recruited her younger brother, David Greenglass, to give information to the Soviets. While serving in the U.S. Army, Greenglass had been assigned to work on the famed Manhattan Project, which led to the creation of the atomic bomb, and he delivered notes and sketches of classified materials to Julius Rosenberg. According to Greenglass, Ethel took the notes and typed them up for the Soviets. This accusation seems to be the only direct evidence of Ethel's involvement in her husband's spying activities.

In 1950, Ethel and Julius Rosenberg were charged with conspiracy to commit espionage along with David Greenglass and Rosenberg's friend, Morton Sobell. Many experts believe that Ethel was charged in the case as a way to force Julius to give up names of other conspirators. But the move backfired. The couple remained steadfast in proclaiming their innocence.

The Rosenbergs went to trial in March 1951. David Greenglass testified against them in exchange for a lesser sentence. With the pervasive anticommunist crusade already under way in the United States, the Rosenbergs had little chance of a fair trial. Ethel Rosenberg was convicted and sentenced to death, despite a lack of direct evidence linking her to Julius's activities.

Supporters of the Rosenbergs campaigned and protested on behalf of the couple. Both presidents Harry S. Truman and Dwight D. Eisenhower were asked to give them clemency, but refused to grant a presidential pardon. The Rosenbergs fought for their lives through a series of court appeals, but to no avail.

Ethel Rosenberg was executed at Sing Sing Prison in Ossining, New York, on June 19, 1953, just minutes after her husband was put to death. A rabbi had reportedly asked to Ethel to cooperate with authorities after Julius's death to stop her execution, but she refused. According to The New York Times, she said, "I have no names to give. I'm innocent."

The case against Ethel Rosenberg has been questioned extensively since her death. While more evidence on her husband has emerged over the years, Ethel's role in the conspiracy has remained unclear. The most damaging testimony came from her own brother. David Greenglass, however, later admitted that he lied about his sister's involvement in the case.