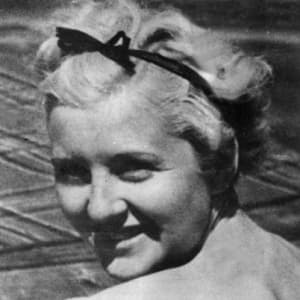 Eva Braun was the mistress and later the wife of Adolf Hitler. Braun and Hitler killed themselves on April 30, 1945, the day after their wedding—a decided alternative to falling into the hands of enemy troops.

Eva Braun was born on February 6, 1912, in Munich, Germany, and went on to work as an assistant at the shop of Heinrich Hoffman, who was Adolf Hitler's photographer. She became Hitler's mistress and would suffer emotionally during the relationship, attempting to commit suicide twice, though remaining steadfast to Hitler. As the Nazi forces fell at the end of World War II, the two wed on April 29, 1945. The next day, they both committed suicide.

Eva Anna Paula Braun was born on February 6, 1912, in Munich, Germany, to a school teacher and seamstress. Braun was the middle child of three daughters in a middle-class family and seemed to be the typical teenager, with a major interest in clothes, boys and makeup. She enjoyed outdoor activities and wasn't too interested in her studies, earning average grades.

She attended a convent school, but left upon realizing that it wasn't a good fit. She later went to work as a bookkeeper and assistant at the shop of Heinrich Hoffman, who had become Adolf Hitler's personal photographer. Braun met Hitler at the store in 1929, when she was 17 and he was 40, running the National Socialist German Workers Party.

In the early 1930s, Braun and Hitler became more closely involved after one of Hitler's mistresses committed suicide. The exact romantic extent of Braun's relationship with the leader is still not fully known, though Braun expressed deep devotion to the relationship. (The correspondence between Hitler and Braun was later destroyed upon Hitler's orders, with limited diary entries found from Braun.) It is reported that Hitler was often an oppressive presence and devoted the bulk of his time to the development of the Nazi Party. Eva's father, Fritz, was deeply opposed to his daughter's involvement with the leader.

Braun and Hitler kept their relationship a secret, with there generally being no public sightings of the couple together. Braun did, however, attend the Nazi's Nuremberg convention in 1935. It is reported that she generally wielded no influence in Hitler's political decisions, and that he chose her as a companion because he believed she would not become a challenge to his authority.

In both 1932 and 1935, Braun attempted suicide; Hitler funded an apartment for Braun as a result of the second attempt. In 1936, she also took up residence at Hitler's Berghof chalet in the Bavarian Alps, wielding some influence in the domestic sphere and enjoying activities such as gymnastics, sunbathing, skiing and swimming. She is said to have remained generally unperturbed during the initial developments and invasions that initiated World War II, though her mood changed when the tide was turning against the Axis Powers.

Toward the end of the war, Braun could have left Hitler, but she instead joined him at his bunker in Berlin. In the final days of the war, the two contemplated killing themselves rather than fall into the hands of enemy troops. For her show of loyalty, Hitler agreed to marry Braun. The couple wed on April 29, 1945. The following day, on April 30, 1945, they committed suicide. Braun died from ingesting poison while Hitler poisoned and shot himself. Their bodies were brought to the bombed-out garden behind the Reich Chancellery, where they were burned.

German film historian and artist Lutz Becker, who'd lived through the horrors of Berlin as a child during the war's final days, eventually discovered a collection of films that Braun had created. She had recorded 16-millimeter home movie footage in color during her time at Berghof, with some of the imagery standing in stark contrast to the Nazi propaganda machine.

Other images, in the form of photographs that were held by the U.S. National Archives and unearthed by Reinhard Schulz, have surfaced of Braun as well. The pictures range from family and school portraiture to snapshots with friends, to Braun in blackface imitating Al Jolson.

The first comprehensive biography on Braun was written by Heike B. Gortemaker and published in 2011: Eva Braun – Life With Hitler.