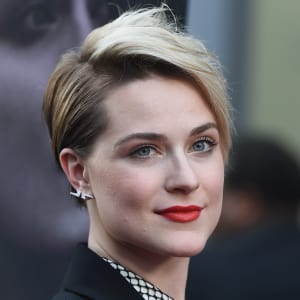 Evan Rachel Wood is an American actress and singer whose breakout role in the film ‘Thirteen’ led to other notable projects such as ‘The Wrestler,’ ‘Mildred Pierce,’ and ‘Westworld.’

Who Is Evan Rachel Wood?

Evan Rachel Wood was born in 1987 in Raleigh, North Carolina. In 2003 Wood starred in the teen drama Thirteen, which proved to be her breakout role and earned her a Golden Globe nomination. After working on a spate of independent films, including Running With Scissors (2006) and Across the Universe (2007), Wood took to more mainstream fare with films like The Wrestler (2008) and the cable dramas True Blood and Mildred Pierce. Recent projects include performing with her electro-pop band Rebel and a Basketcase, as well as starring in HBO's Westworld. She is also known for her past relationship with Marilyn Manson.

'Across the Universe,' 'The Wrestler'

Wood's star would rise in the mid-2000s. She was part of an ensemble cast in Running With Scissors (2006) and in Across the Universe (2007), in which she sang a rendition of the Beatles' "If I Fell." In 2008 she starred in Darren Aronofsky's The Wrestler, playing Mickey Rourke's estranged daughter, and co-starred in Woody Allen's Whatever Works (2009).

Wood also took to the small screen around this time, playing the recurring role of queen vampire of Louisiana in HBO's True Blood for two seasons. In 2011 she continued working with the premium cable network, playing Kate Winslet's daughter in the miniseries Mildred Pierce, for which she garnered an Emmy nomination for Best Supporting Actor in a Miniseries.

In 2016 Wood would partner up with HBO a third time in the fantasy sci-fi series Westworld, based on the 1973 movie from Michael Crichton. She received Golden Globe and Emmy nominations for her portrayal of Dolores Abernathy, one of the androids in a Western theme park who begins developing an awareness of her programmed existence. Wood returned for Season 2 of the show, which premiered in April 2018.

Outside of acting, Wood lends her voice to various music compilations and is one-half of the electro-pop music duo Rebel and a Basketcase, her other half being multi-instrumentalist Zach Villa, whom she became briefly engaged to in 2017.

Wood was in a year-long relationship with actor Jamie Bell, whom she met on the set of Green Day's music video "Wake Me Up When September Ends." The two rekindled their relationship in 2011 and got married a year later and had a son. In 2014 the couple divorced.

In the years between her relationship with Bell, Wood famously dated and was briefly engaged to Marilyn Manson. Openly bisexual, she is an advocate for bi-awareness and inclusion.

In February 2018, the actress shared her experiences with domestic violence and sexual abuse to members of the House Judiciary Committee as part of an effort to secure a bill of rights for sexual assault survivors.

Recalling instances in which she was bound and raped, she said she suffered from depression and attempted suicide, before turning a corner after seeking professional help. "Others are not so fortunate," she said, "and because of this, rape is often more than a few minutes of trauma, but a slow death."

Evan Rachel Wood was born on September 7, 1987 in Raleigh, North Carolina, to actor parents. She has three brothers and one sister. After performing in her family's theater productions as a young girl, her parents divorced and she moved with her mother to Los Angeles. It was there during the mid '90s that she began appearing in television shows like American Gothic and Once and Again. Her first major screen role was opposite Kevin Bacon and Mary Stuart Masterson in Digging to China (1998), and she also appeared in the witch fantasy film Practical Magic, playing one of Sandra Bullock's daughters.