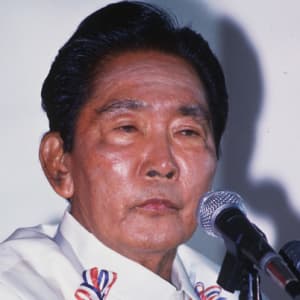 Known for running a corrupt, undemocratic regime, Ferdinand Marcos was the president of the Philippines from 1966 to 1986 before fleeing to the United States.

Who Was Ferdinand Marcos?

Ferdinand Marcos, born on September 11, 1917, in Ilocos Norte province, was a member of the Philippine House of Representatives (1949-1959) and Senate (1959-1965) before winning the presidential election. After winning a second term, he declared martial law in 1972, establishing with wife Imelda an autocratic regime based on widespread favoritism that eventually lead to economic stagnation and recurring reports of human rights violations. Marcos held onto the presidency until 1986, when his people rose against his dictatorial rule and he was forced to flee. He died on September 28, 1989 in exile in Honolulu, Hawaii.

When the Marcoses went into exile, they took with them a reported $15 million. However, the government of the Philippines was aware Marcos had collected a far larger fortune. The country's supreme court estimated he had amassed $10 billion while in office.

Ascension to the Presidency

Marcos was inaugurated on December 30, 1965. His first presidential term was notable for his decision to send troops into the fray of the Vietnam War, a move he had previously opposed as a Liberal Party senator. He also focused on construction projects and bolstering the country's rice production.

Marcos was reelected in 1969, the first Filipino president to win a second term, but violence and fraud were associated with his campaign, which was believed to be funded with millions from the national treasury. What arose from the campaign unrest became known as the First Quarter Storm, during which leftists took to the streets to demonstrate against both American involvement in Philippine affairs and the increasingly apparent dictatorial style of Ferdinand Marcos.

Marcos decreed martial law in 1972, with Imelda eventually becoming an official who often appointed her relatives to lucrative governmental and industrial positions. (She would later be known for accumulating upward of 1,000 pairs of shoes along with Manhattan luxury real estate.) These acts were part of Marcos’ state-imposed "crony capitalism," by which private businesses were seized by the government and handed over to friends and relatives of regime members, later leading to much economic instability. Though making domestic headway over time with infrastructure projects and harvesting, Marcos' administration bolstered the military by huge numbers (recruiting unqualified personnel), curtailed public discourse, took over the media and imprisoned political opponents, students and denouncers at will.

Marcos also oversaw a 1973 national referendum that allowed him to hold power indefinitely. Preceding a visit by Pope John Paul II, martial law ended in January 1981. Marcos, serving as both president and prime minister by this point, resigned from the latter post, still retaining the power to implement laws at his command and imprison dissenters without due process. In June 1981, he would win presidential reelection for another six years, with his political opponents boycotting the vote.

On August 21, 1983, the previously jailed Benigno Aquino Jr. returned from his long exile to offer the Philippine people a new face of hope, but he was shot and killed as he stepped off the plane in Manila. Countrywide demonstrations followed in the wake of the killing. Marcos launched a civilian-based independent commission whose findings implicated military personnel in Aquino's assassination, although it has since been suggested that Marcos or his wife had ordered the murder.

With the country's economy plummeting and Aquino's murder becoming part of the national consciousness, the urban wealthy and middle class, often core supporters of Marcos, began to push for an end to his power. Also contributing to Marcos' downfall was a far-reaching Communist insurgency and the resolution signed in 1985 by 56 assemblymen calling for his impeachment for enriching his personal coffers via crony capitalism, monopolies and overseas investments that violated the law. To quiet the opposition and reassert his power, Marcos called for special presidential elections to be held in 1986, a bit more than a year before the end of his current six-year term. The popular Corazon Aquino, the widow of Benigno, became the presidential candidate of the opposition.

Marcos managed to defeat Aquino and retain the presidency, but his victory was deemed by many to be fraudulent. As word spread of the rigged election, a tense standoff ensued between supporters of Marcos and those of Aquino, with thousands upon thousands of citizens taking to the streets to support a non-violent military rebellion.

With his health failing and support for his regime fading fast, on February 25, 1986, Ferdinand Marcos and much of his family were airlifted from the Manila presidential palace, going into exile in Hawaii. Evidence was later uncovered showing that Marcos and his associates had stolen billions from the Philippine economy.

Focusing on racketeering charges, a federal grand jury then indicted both of the Marcoses, but Ferdinand died in Honolulu in 1989 from cardiac arrest after suffering from an array of ailments. Imelda was acquitted of all charges and returned to the Philippines the following year, though she went on to face other legal challenges. She would later run unsuccessfully for president and win congressional elections, with two of her three children, Imee and Ferdinand Jr., also serving as governmental officials.

Since 1993 Marcos' corpse had been embalmed in a glass casket in his home province of Ilocos Norte. In 2016, President Rodrigo Duterte ordered Marcos' body to be buried at the National Heroes' Cemetery in Manila, with protests erupting in opposition to such a move considering Marcos' human rights abuses. Nonetheless, in November the remains of Marcos were interred at the new site in a hero's burial.

Ferdinand Marcos was born on September 11, 1917, in the municipality of Sarrat, part of the Ilocos Norte province. He went to school in Manila and later attended law school at the University of the Philippines. His father, Mariano Marcos, was a Filipino politician, and on September 20, 1935, after Julio Nalundasan defeated Mariano for a seat in the National Assembly (for the second time), Nalundasan was shot and killed in his home. Ferdinand, Mariano and other family members were eventually tried for the assassination, and Ferdinand was found guilty of murder.

Appealing the verdict, Ferdinand argued on his own behalf to his country's supreme court and won acquittal in 1940. Remarkably, while Marcos was preparing his case in jail, he was studying for the bar exam and became a trial lawyer in Manila subsequent to the acquittal. (It has been reported that Marcos' freedom was abetted by Judge Ferdinand Chua, who was also believed by some to be Marcos' actual biological father.)

During World War II, Ferdinand Marcos served as an officer with his country's armed forces, later claiming that he was also a top figure in the Filipino guerrilla resistance movement. (U.S. governmental records eventually revealed these assertions to be false.) At the end of the war, when the American government granted the Philippines independence on July 4, 1946, the Philippine Congress was created. After working as a corporate attorney, Marcos campaigned and was twice elected as representative to his district, serving from 1949 to 1959. In 1959, Marcos took a seat in the senate, a position he would hold until he ran for and won the presidency in 1965 on the Nationalist Party ticket.