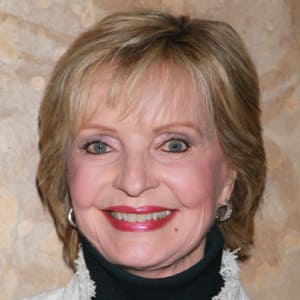 Actress Florence Henderson became a television icon when she played the role of Carol Brady, the mom of a blended family with six children, on the 1970s sitcom ‘The Brady Bunch.’

Actress Florence Henderson was born on February 14, 1934, in Dale, Indiana. She started her career in theater, appearing on Broadway and also starred in the national tour of Rodgers & Hammerstein's Oklahoma!. Henderson moved over to TV, and became The Tonight Show's first female guest host. In 1969 she landed the role that made her famous, Carol Brady on The Brady Bunch, and she hosted The Florence Henderson Show on RLTV from 2007-2009. Henderson died on November 24, 2016 at the age of 82.

Actress Florence Henderson was born on February 14, 1934, in Dale, Indiana. Her mother was a homemaker and her father was a tobacco sharecropper, and she was the youngest of 10 children. Henderson learned to sing at age two, by which time she had a repertoire of 50 songs she knew by heart. By age eight she was singing in pubic, performing in local grocery stores, and at 16, she was earning money singing for the Kiwanis, the Elks, and the American Legion. Her family was poor and life was harsh; shortly after graduating from high school, she moved to New York City to go to the American Academy of Dramatic Arts and start a new life.

Her theater career began in musicals, with the touring production of Oklahoma! and her Broadway debut, in 1952, in Wish You Were Here. While performing in Oklahoma!, she met Shirley Jones, who would play another iconic '70s TV mom in The Partridge Family and with whom she would remain lifelong friends. She returned to Oklahoma! when it was revived off-Broadway, and a year later, was back on Broadway performing in the musical Fanny. She continued to work in theater up until the late 1960s.

Henderson warmed to TV quickly. She guest starred on I Spy and various variety shows. Bright, cheerful, and smart, she was recruited for ad campaigns, too. In 1962, she became the first woman ever to guest host The Tonight Show Starring Johnny Carson, and that same year, became "The Today Girl," a young woman on The Today Show who covered the weather and light news. (Barbara Walters would one day take this position as well.) She was a regular guest on variety and talk shows with Ed Sullivan, Merv Griffin, Steve Allen and Dean Martin, and appeared frequently on game shows—which she loved—from the late 1950s through the late 1970s.

The role for which Henderson is most famous came in 1969, while she was shooting her first feature film, The Song of Norway (1970). Although she was the third choice to play Carol Brady, after Joyce Bulifant and Shirley Jones, she landed the role. For the first six episodes, while Henderson was still on location for her movie, the Brady Bunch production team had to film everything they could without her, then shot her scenes immediately when she returned to California.

Henderson played Carol Brady for five years and was well-liked for her charm and camaraderie with the rest of the cast. As a working mother herself, she lobbied for Carol to have a job, but producers refused. When the show met the minimum number of episodes required for syndication, it was cancelled, despite its popularity, and is still running in syndication today.

The bonds she formed with her fellow cast members never broke. She stayed close to Robert Reed (Mike) and Ann B. Davis (Alice) right up until their deaths, as well as her TV children; all six grown-up “kids” celebrated her 80th birthday with her in 2014.

The Brady Bunch was a big hit, and became increasingly popular in re-runs. It is now considered a cultural icon of the '70s, spawning multiple TV movies, variety specials, and reunion specials, and two spoof feature films in the mid-'90s.

Henderson also became well known for her appearances in commercials. She was the spokeswoman for Wesson Oil (because it had that "Wessonality") for 30 years, starting in 1976, and then became the face of Polident, despite being proud of not needing dentures herself. She said her family members used it, and that's why she stood behind it.

Henderson stayed on TV consistently through the years. She hosted cooking shows, and guest starred on Roseanne, Ellen, Ally McBeal, The King of Queens, Samantha Who?, 30 Rock, and more. In 2010, she competed on Dancing With The Stars (at age 76) and six years later, when her former co-star Maureen McCormick (Marcia) competed, Henderson was in the audience to cheer her on.

In 2013, she participated in Rachael vs. Guy Celebrity Cook-Off, and made it all the way to the finals, despite having her foot in a boot and a few decades on most of her competitors.

Henderson remained busy until her death in 2016 hosting shows, doing guest roles, or popping up frequently in live shows and public appearances. In 2015, when Matt Lauer told her, “There are just some things we can’t do at 81,” she replied, “I didn’t get that memo.”

Florence Henderson died of heart failure at Cedars-Sinai Medical Center in Los Angeles on November 24, 2016 at the age of 82.

Henderson had four children, Barbara, Lizzie, Joseph, and Robert, with her first husband Ira Bernstein, to whom she was married from 1955 to 1985. She married hypnotherapist John Kappas in 1987 after seeking treatment for depression, and inspired by him, became a licensed hypnotherapist herself. He died in 2002.