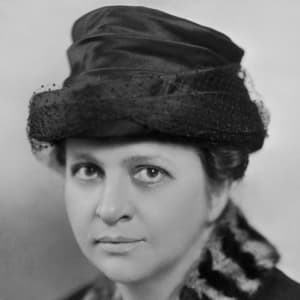 Frances Perkins was the first female to serve in the U.S. presidential cabinet. As secretary of labor, she helped with the New Deal and Social Security.

Who Was Frances Perkins?

Frances Perkins was born on April 10, 1880, in Boston, Massachusetts. She graduated with her Masters from Columbia University in 1910. In 1929, Franklin D. Roosevelt, governor at the time, made her the state’s labor commissioner. With her extensive experience in public service, Perkins made history in 1933 when President Franklin D. Roosevelt appointed her be to the U.S. Secretary of Labor, the first women to hold a U.S. cabinet position. Perkins helped in the creation of the New Deal and Social Security programs. Frances Perkins died in May of 1965 at the age of 85.

Frances Perkins was born Fannie Coralie Perkins in Boston on April 10, 1880 and spent her childhood in Worcester, Massachusetts. The family frequently visited her grandmother, Cynthia Otis Perkins, who had a strong influence on her. Her parents preached the ideals of hard work, conservative values and the Republican ideology. Education was equally important and her father, Frederick Perking gave Fanny lessons in Greek grammar and classical literature. With his strong support, she enrolled in the nearly-all-male Worcester Classical High School. Though rare for the time, it was always understood that Fanny would attend college. In 1898 she enrolled at Mount Holyoke College.

A Calling to Public Life

After graduating in 1902 with a Bachelor of Arts degree in chemistry and physics, Frances Perkins parents expected her to follow the path of so many women of the era: live at home, teach school and wait for a suitable man to come along and marry But she had other ideas. Initially, unable to find employment in social work she began reading material in the field such as Jacob Riis’s How the Other Half Lives, depicting New York’s slums in the 1890s. She left home, got a teaching job in Illinois and changed her name to Frances. On her free time and vacations she worked at Chicago Commons and Hull House, working with the poor and unemployed. There she found her life’s’ calling.

In 1907, Frances Perkins joined the Philadelphia Research and Protective Association which worked with newly arrived immigrant girls on ways to avoid prostitution. She studied economics and sociology at the University of Pennsylvania’s Wharton School and in 1909 began a fellowship at the New York School of Philanthropy investigating childhood malnutrition in New York’s Hell’s Kitchen. She received her Master’s Degree in sociology from Columbia University

in 1910. That same year, Perkins began advocating for workers as the head of the New York Consumers League. She saw first-hand the deadly potential of poor working conditions as a witness to the infamous 1911 Triangle Shirtwaist Fire that killed more than 100 factory employees.

A Woman in Public Service

At the suggestion of Theodore Roosevelt, New York City Mayor Al Smith appointed her secretary for the New York Citizens Committee on Public Safety. She did such a good job that in 1918 Smith appointed her to the State Industrial Commission, naming her its Chair in 1926. Two years later Franklin Delano Roosevelt promoted her to Industrial Commissioner where she helped improve workplace regulations and related social programs. After Roosevelt won the presidency and took office in 1933, he brought her to Washington, D.C., to become the U.S. Secretary of Labor, a post she would hold for twelve years. As the first female cabinet member, Perkins worked hard to improve the country’s labor conditions and played an important role in the development of Roosevelt’s New Deal programs. Perkins fought for laws to set minimum wages, pensions, unemployment insurance, restrictions on child labor practices and contributed to the creation of the Social Security system serving on the President’s Committee on Economic Security. Perkins stayed in her position until 1945 and then joined the U.S. Civil Service Commission.

Married to Paul Caldwell Wilson in 1913, Frances Perkins resigned from public service not long after his death in 1952. She went on to teach Cornell University’s New York State School of Industrial Relations as a lecturer. Her alma mater Mount Holyoke College created the Frances Perkins Program which is a specially designed program for women of non-traditional age who wish to complete the requirements for a Bachelor of Arts degree. On May 14, 1965, Frances Perkins died of a stroke at Midtown Hospital in New York City at age 85. She was buried alongside her husband, Paul Wilson in Newcastle, Maine.