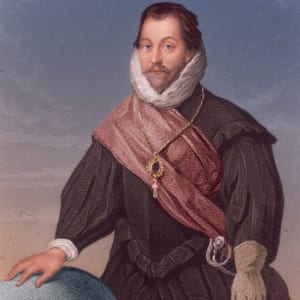 English admiral Sir Francis Drake circumnavigated the globe from 1577-1580, helped defeat the Spanish Armada of 1588 and was the most renowned seaman of the Elizabethan era.

Who Was Sir Francis Drake?

Sir Francis Drake (c. 1540 to January 28, 1596) was an English explorer involved in piracy and illicit slave trading who became the second person ever to circumnavigate the globe. In 1577, Drake was chosen as the leader of an expedition intended to pass around South America, through the Strait of Magellan, and explore the coast that lay beyond. Drake successfully completed the journey and was knighted by Queen Elizabeth I upon his triumphant return. In 1588 Drake saw action in the English defeat of the Spanish Armada, though he died in 1596 from dysentery after undertaking an unsuccessful raiding mission.

In 1595, Queen Elizabeth I called upon Sir Francis Drake and his cousin, John Hawkins, to capture Spain's treasure supply in Panama, in hopes of cutting off revenue and ending the Anglo-Spanish War. After defeat at Nombre de Dios, Drake's fleet moved farther west and anchored off the coast of Portobelo, Panama. There, Sir Francis Drake contracted dysentery and, on January 28, 1596, died of a fever. He was buried in a lead coffin at sea near Portobelo. Divers continue to search for the coffin.

When and Where was Francis Drake Born?

Like many of his contemporaries, no birth records exist for Sir Francis Drake. It is believed he was born between 1540 and 1544, based on dates of later events.

Francis Drake was the eldest of 12 sons born to Mary Myllwaye (spelled "Mylwaye" in some cases) and Edmund Drake. Edmund was a farmer on the estate of Lord Francis Russell, the second earl of Bedford.

Drake was eventually apprenticed to a merchant who sailed coastal waters trading goods between England and France. He took to navigation well and was soon enlisted by his relatives, the Hawkinses. They were privateers who prowled the shipping lanes off the French coast, seizing merchant ships.

Work as a Slave Trader

By the 1560s, Drake was given command of his own ship, the Judith. With a small fleet, Drake and his cousin, John Hawkins, sailed to Africa and worked illegally as slave traders. They then sailed to New Spain to sell their captives to settlers, an action that was against Spanish law.

In 1568 Drake and Hawkins became trapped in the Mexican port of San Juan de Ulúa in a face-off with the newly established Spanish viceroy's forces. The two escaped on their respective ships while scores of their men were killed. The incident instilled in Drake a deep hatred of the Spanish crown.

First Commission from Queen Elizabeth I

In 1572 Drake obtained a privateer's commission from Queen Elizabeth I, which was essentially a license to plunder any property belonging to King Philip II of Spain. That year Drake embarked on his first independent voyage to Panama from Plymouth, England. He planned to attack the town of Nombre de Dios, a drop-off point for Spanish ships bringing silver and gold from Peru.

With two ships and a crew of 73 men, Drake captured the town. However, he was seriously wounded during the raid, so he and his men withdrew without much treasure. They stayed in the area for a time, and after Drake’s wounds healed, they raided several Spanish settlements, picking up much gold and silver. They returned to Plymouth in 1573.

With the success of the Panama expedition, Queen Elizabeth sent Drake out against the Spanish along the Pacific coast of South America in late 1577. She also clandestinely assigned him the task of exploring the Northwestern coast of North America, seeking a Northwest passage.

Drake had five ships for the expedition. Among his men were John Winter, commander of one of the vessels, and officer Thomas Doughty. Major tensions flared between Drake and Doughty during the trip, potentially motivated by political intrigue. Upon arriving off the coast of Argentina, Drake had Doughty arrested with the accusation of planned mutiny. After a brief and possibly illegal trial, Doughty was convicted and beheaded.

Francis Drake then led the fleet into the Strait of Magellan to reach the Pacific Ocean. They were soon caught in a storm, with Winter's ship reversing course and returning to England. Continuing to face stormy weather, Drake remained in his flagship, the newly dubbed Golden Hind and only remaining vessel from the original squad, sailing up the coasts of Chile and Peru and plundering an unprotected Spanish merchant ship full of bullion. Drake reputedly landed off the coast of California, claiming it for Queen Elizabeth.

(There is some debate about Drake's voyages, with certain historians asserting that Drake deliberately recorded misleading geographical information to cover the true scope of his travels from the Spanish. There has been conjecture that Drake in fact reached the Oregon coast or even as far north as British Columbia and Alaska. Even with the continuing debate, in 2012 the U.S. government officially recognized a cove in California's Point Reyes Peninsula as Drake's landing site, an action championed by the Drake Navigators Guild.)

After repairing the ship and replenishing food supplies, Drake set sail across the Pacific, through the Indian Ocean and around the Cape of Good Hope back to England, landing at Plymouth in 1580. Drake had thus become the first Englishman to circumnavigate the world and the second person ever, after the Basque mariner Juan Sebastian Elcano (who took over Ferdinand Magellan’s expedition after his death).

The treasure Drake captured made him a wealthy man, and the Queen knighted him in 1581. That year he also was appointed mayor of Plymouth and became a member of the House of Commons.

Battle With the Spanish Armada

Between 1585 and 1586, relations between England and Spain grew worse. Elizabeth unleashed Drake on the Spanish in a series of raids that captured several cities in North and South America, taking treasure and inflicting damage on Spanish morale. These acts were part of what prompted Spain’s Philip II to invade England. He ordered the construction of a vast armada of warships, fully equipped and manned. In a preemptive strike, Drake conducted a raid on the Spanish city of Cadiz, destroying more than 30 ships and thousands of tons of supplies. English philosopher Francis Bacon would come to refer to this act as "singeing the king of Spain’s beard."

In 1588 Drake was appointed vice admiral of the English Navy, under Lord Charles Howard. On July 21, 130 ships of the Spanish Armada entered the English Channel in a crescent formation. The English fleet sailed out to meet them, relying upon long-range cannon fire to significantly damage the armada over the ensuing days.

On July 27th, Spanish commander Alonso Pérez de Guzmán, the duke of Medina Sidonia, anchored the armada off the coast of Calais, France, in hopes of meeting up with Spanish soldiers who would join in the invasion. The next evening, Lord Howard and Sir Francis Drake organized fire ships to sail right into the Spanish fleet. They did little damage, but the ensuing panic caused some of the Spanish captains to cut anchor and scatter. Strong winds carried many of the ships towards the North Sea, and the English followed in pursuit.

At the Battle of Gravelines, the English began getting the better of the Spaniards. With the armada formation broken, the lumbering Spanish galleons were easy targets for the English ships, which could quickly move in to fire one or two well-aimed broadsides before scurrying off to safety. By late afternoon, the English pulled back. Due to weather and the presence of enemy forces, Medina Sidonia was forced to take the armada north around Scotland and back to Spain. As the fleet sailed away from the Scottish coast, a strong gale drove many ships onto the Irish rocks. Thousands of Spaniards drowned, and those who reached land were later executed by English authorities. Less than half of the original fleet returned to Spain, sustaining huge casualties.

In 1589 Queen Elizabeth ordered Drake to seek out and destroy any remaining ships of the armada and help Portuguese rebels in Lisbon fight against Spanish occupiers. The expedition instead sustained major losses in terms of lives and resources. Drake returned home, and for the next several years busied himself with duties as mayor of Plymouth.