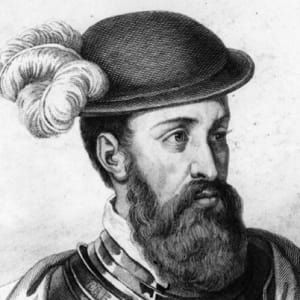 Francisco Pizarro was born circa 1476 in Trujillo, Spain. In 1513, he joined Vasco Núñez de Balboa in his march to the "South Sea," during which Balboa discovered the Pacific Ocean. In 1532, Pizarro and his brothers conquered Peru. Three years later, Pizarro founded the nation's new capital, Lima. Pizarro was assassinated on June 26, 1541, in Lima, Peru, by vengeful members of an enemy faction of conquistadors.

Conquistador Francisco Pizarro was born, an illegitimate child, circa 1476, in Trujillo, Spain—an area stricken by poverty. His father, Captain Gonzalo Pizarro, was a poor farmer. His mother, Francisca González, was of humble heritage. Pizarro grew up without learning how to read. Instead, he herded his father's pigs.

As young man, Pizarro heard tales of the New World and was seized by a lust for fortune and adventure. In 1510, he accompanied Spanish explorer Alonzo de Ojeda on a voyage to Urabá, Colombia. Although the expedition was unfruitful, Pizarro proved he could be relied on in a bind.

March to the Sea

In 1513, Pizarro joined conquistador Vasco Núñez de Balboa in his march to the "South Sea," across the Isthmus of Panama. During their journey, Balboa and Pizarro discovered what is now known as the Pacific Ocean, although Balboa allegedly spied it first, and was therefore credited with the ocean's first European discovery.

Ironically, Pizarro later arrested Balboa under the orders of Pedro Arias de Ávila (also known as Pedrarias), Balboa's rival and a known tyrant. Afterward, Pizarro stayed in Panama for a time, where he was awarded an estate, served as mayor of Panama City and amassed a small fortune.

In 1524, Pizarro teamed up with navigator Diego de Almagro and a priest named Fernando de Luque. The first of their reconnaissance voyages went as far as the San Juan River. The next gave Pizarro the chance to explore further south along the coast. In the meantime, Pizarro's chief navigator, Bartolomé Ruiz, forged across the equator and then returned with word of those regions south of the equator.

In 1528, Pizarro went back to Spain and managed to procure a commission from Emperor Charles V. Pizarro was to conquer the southern territory and establish a new Spanish province there. In 1532, accompanied by his brothers, Pizarro overthrew the Inca leader Atahualpa and conquered Peru. Three years later, he founded the new capital city of Lima.

Over time, tensions increasingly built up between the conquistadors who had originally conquered Peru and those who arrived later to stake some claim in the new Spanish province. As a result, conquistadors were torn into two factions—one run by Pizarro, and the other by his former associate, Diego Almagro. After taking Cuzco, Almagro engaged Pizarro and his brothers in the Battle of Las Salinas. Upon the Pizarro brothers' victory, in 1538, Hernando Pizarro captured and executed Almagro. On June 26, 1541, in Lima, Peru, members of the defeated party avenged Almagro's death by assassinating Francisco Pizarro.