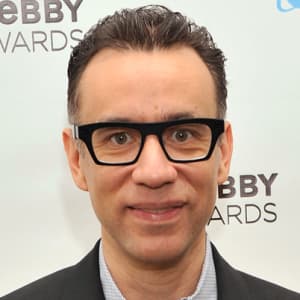 Fred Armisen is an Emmy Award-nominated writer, musician and actor known for his roles on Saturday Night Live and Portlandia.

Born on December 4, 1966, in Hattiesburg, Mississippi, Fred Armisen pursued a career as a musician before making it big in comedy, joining the cast of Saturday Night Live. He became known for his wide-ranging impersonations on the show while simultaneously working in film on projects like The Rocker, Deck the Halls and Easy A. He has also created and starred on the IFC series Portlandia. In 2014, it was revealed that Armisen would be the bandleader on Late Night with Seth Meyers.

Famed actor and comedian Fred Armisen was born on December 4, 1966, in Hattiesburg, Mississippi, to international parentage, with his mother having a Venezuelan background and his father being of Japanese/German descent. The young Armisen grew up on Long Island, having traveled to Brazil as well, and eventually attended the School of Visual Arts in New York City, where he focused on film production.

Music was another love of Armisen's, and in the '90s, he joined the Chicago-based punk band Trenchmouth. Armisen also played with the Windy City's own Blue Man Group and the band Those Bastard Souls before heading to the South by Southwest Music Festival and creating the parody video Fred Armisen's Guide to Music and SXSW with his wife, Sally Timms.

Armisen's work created buzz, and he became an on-air personality for the HBO music show Reverb, also showcasing his comedic talent in between network programming. Around the turn of the century, he was appearing on late night variety shows and hitting the comedy circuit, later becoming known for characters like the drum-playing Fericito.

In 2002, Armisen joined the cast of Saturday Night Live. Over time, he garnered a reputation for strong impersonations, portraying a wide range of figures that have included President Barack Obama, Queen Elizabeth, Martin Scorsese, Tony Danza and Iranian President Mahmoud Ahmadinejad. He also appeared on other comedic series such as The Sarah Silverman Program and 30 Rock.

Armisen began to develop a career on the big screen as well, appearing in many films during the first decade of the 2000s. Some of his work included the Will Ferrell comedic vehicle Anchorman: The Legend of Ron Burgundy (2004), the sexual drama Kiss Me Again (2006), the surrogacy spoof starring fellow SNL alums Tina Fey and Amy Poehler Baby Mama (2008), and the Emma Stone teen satire Easy A (2010).

Armisen had worked with Carrie Brownstein of the feminist rock band Sleater-Kinney to form the comedy duo ThunderAnt. The two collaborated with director and co-writer Jonathan Krisel to create and star on the IFC series Portlandia, featuring witty, humorous skits set in Portland, Oregon.

Following its third season in 2013, Portlandia, a critical smash, was awarded a fourth season. Armisen, Brownstein and Krisel were also nominated for 2012 and 2013 writing Emmy Awards for their work.

On the heels of his successful series, Armisen was named the bandleader of Late Night with Seth Meyers. Meyers made the announcement in February of 2014 on Twitter. Already an experienced drummer—having battled Questlove of the Roots and Late Night with Jimmy Fallon to a drumoff—the Portlandia star will still head the band, even when off shooting his award-winning series. However, the comedic musician will not be playing the drums as part of the band, instead taking on the role of lead vocalist and guitarist.

Entering his second marriage, Armisen wed Mad Men actress Elisabeth Moss in October of 2009, though the two would divorce in May 2011. Moss spoke very briefly about the difficulty of the marriage, with Armisen speaking in a Howard Stern interview of his pulling away. He has also been romantically linked to former SNL co-star Abbey Elliott.

In 2013, Armisen had his final season with SNL after 11 years. In August of the same year, Armisen continued his behind-the-scenes work by directing a live concert webcast of the band King of Leon.