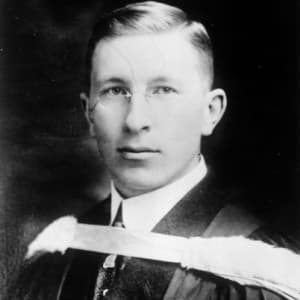 Sir Frederick Grant Banting was a Canadian scientist and doctor, whose research led to the discovery of insulin to treat diabetic patients.

Sir Frederick Grant Banting was a Canadian scientist and doctor noted for his contributions to the discovery of insulin. After graduating with a degree in medicine from the University of Toronto he joined the Canadian Army Medical Corps., serving in France during World War I. When the war ended in 1919, he returned to Canada, working part time as a medical practitioner in Ontario and later serving as the Resident Surgeon at the Hospital for Sick Children in Toronto. He soon developed a deep interest in diabetes, directing his studies to research methods for extracting insulin from the pancreas. Together with medical student Charles Best, he discovered a way to isolate insulin and effectively treat diabetic patients. He was awarded the Nobel Prize in 1923.