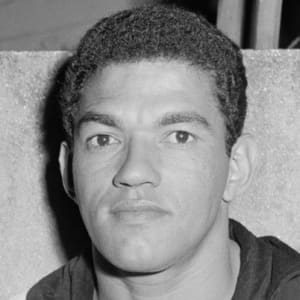 Brazilian soccer star Garrincha overcame birth defects to lead his country to victories in the 1958 and 1962 World Cups.

Born on October 28, 1933, in Rio de Janeiro, Brazil, Garrincha overcame a series of physical defects to become one of his country's greatest soccer players. He starred for the 1958 World Cup–winning team, and was named the best player of the tournament when Brazil repeated as champions four years later. His body ravaged by the effects of alcoholism, Garrincha was just 49 when he died in 1983.

Manuel Francisco dos Santos was born on October 28, 1933, in Pau Grande, Rio de Janeiro, Brazil. A series of birth defects left him with a deformed spine and a left leg that was six centimeters shorter than his right one; furthermore, he was small for his age, prompting his sister to nickname him "Garrincha," the Portuguese word for wren. Regardless, the youngster overcame the physical odds to become one of the impoverished area's most talented soccer players.

Garrincha joined the Rio Janeiro club Botafogo in 1953, and recorded a hat trick in his first-team debut that July. Although he was passed over for a spot on the Brazilian team for the 1954 World Cup, he quickly became known for his dazzling dribbling displays and confounding moves that left defenders helpless. His entertaining style of play earned him more nicknames, including "Alegria do Povo"—Joy of the People.

The winger was named to the Brazilian squad for the 1958 World Cup in Sweden, and with A Seleção boasting a formidable unit that included Didi, Zagallo, Vava and a gifted 17-year-old named Pelé, they claimed the country's first championship.

Four years later, when Pelé was injured early during the World Cup in Chile, Garrincha took center stage. He knocked home a pair of goals against England in the quarterfinals and two more against the host country in the semifinals, and after Brazil held off Czechoslovakia for its second straight championship, he was named the tournament's best player.

Due in large part to Garrincha's struggles with a knee injury, the Brazilians failed to advance from the first round of the 1966 World Cup in England. Garrincha's final game in the tournament was a 3-1 loss to Hungary; remarkably, it was his only loss in 50 career international appearances.

Garrincha was known for his hard-partying lifestyle. He married multiple times, with Brazilian samba singer Elza Soares among his wives, and is believed to have fathered at least 14 children. A superstar in his home country, he was honored with the dedication of Estádio Nacional Mané Garrincha, an all-purpose arena built in Brasília in 1974.

However, Garrincha lost control over his life as he spiraled into alcoholism. He killed his mother-in-law in a car crash in 1969, and separated from Soares in 1977 after attacking her in a drunken rage.

Penniless and stricken by liver cirrhosis, Garrincha died on January 20, 1983, after lapsing into an alcoholic coma. Despite his late-life troubles, thousands of fans came to view his body at Estádio do Maracanã and to pay their respects to the man who once inspired so much joy on the soccer pitch.

With Brazil named the host country of the 2014 World Cup, administrators set about repairing Estádio Nacional Mané Garrincha in time for tournament matches. Renovated to hold more than 70,000 fans, the stadium had its official inauguration in May 2013.