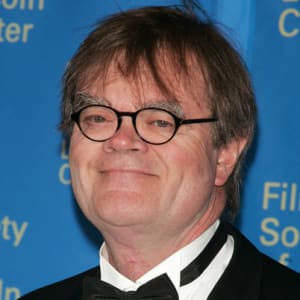 Who Is Garrison Keillor?

Radio personality and writer Gary Edward Keillor was born on August 7, 1942, in Anoka, Minnesota. He attended Anoka High School and was an English major at the University of Minnesota. In 1969, Keillor became a radio announcer at Minnesota Public Radio (MPR), and then began writing for The New Yorker. He is best known for his work on his popular radio variety show A Prairie Home Companion.

In 1969, Keillor began hosting a morning radio program on MPR, called A Prairie Home Companion. Five years later, he transformed the show into a live broadcast, borrowing the name from his earlier program. A popular part of A Prairie Home Companion was Keillor's weekly monologue set in the quiet, fictional Minnesota town of Lake Wobegon, "where all the women are strong, all the men are good looking, and all the children are above average." The show also featured musical guests, imaginary commercials and skits.

With its offbeat mix of humor, heart and song, A Prairie Home Companion developed a substantial following with more than 3 million people a week tuning in to hear the show. Keillor also turned the show into a major motion picture directed by the late, legendary Robert Altman. In addition to writing the screenplay, he also appeared in the film alongside the likes of Meryl Streep, Lindsay Lohan and Kevin Kline.

“I’m returning to a life I envisioned for myself when I was [young], which is a life as a writer,” – Garrison Keillor, 2016

Keillor hosted A Prairie Home Companion for 42 years before signing off as host in July 2016 to a packed Hollywood Bowl. Of the show's end, he confessed he wasn't feeling too sentimental. “I don’t think that one feels nostalgia for something you did every week, and that was so intense and you worked so hard on, and the next week you did it again,” he told The Los Angeles Times. “I feel nostalgia for cities where I was in love with somebody. I feel a certain nostalgia for the game of softball, which I don’t play anymore. But this — it’s a job. I just want it to be good.”

During the final show, President Barack Obama phoned in for live conversation with Keillor. Keillor expressed his admiration for the president calling him the “coolest president in his lifetime.” Obama in turn spoke of his appreciation for Garrison’s storytelling and that he listened whenever he could while on the road and that his show always made him feel good.

It was announced that Keillor would remain involved with A Prairie Home Companion as executive producer, with Chris Thile taking over as the new host in October 2016. Thile was previously best known for his work with the music groups Nickel Creek and the Punch Brothers.

Despite suffering from a stroke in 2009 and two seizures in 2016, Keillor continues keeping busy on a multitude of projects. He is writing a memoir, a new Washington Post column and a screenplay on Lake Wobegon, among other endeavors.

In late 2017, Keiller joined the growing list of public figures accused of inappropriate behavior. On November 30, MPR announced it was severing all business ties with its longtime contributor, including dropping his shows The Writer’s Almanac and The Best of A Prairie Home Companion Hosted by Garrison Keillor.

That day, Keillor offered his side of the story to the Minneapolis Star Tribune: I put my hand on a woman's bare back. I meant to pat her back after she told me about her unhappiness and her shirt was open and my hand went up it about six inches. She recoiled. I apologized. I sent her an email of apology later and she replied that she had forgiven me and not to think about it. We were friends. We continued to be friendly right up until her lawyer called."

Keillor is currently married to musician Jenny Lind Nilsson. The couple has a daughter, Maia Grace. He also has a son, Jason, from his first marriage to Mary Guntzel.