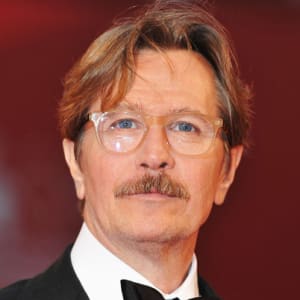 Gary Oldman is an English actor and film director whose edgy, intense style has brought him acclaim in such hits as ‘Sid and Nancy,’ ‘JFK,’ ‘The Dark Knight’ and ‘Darkest Hour.’

Who Is Gary Oldman?

Actor Gary Oldman was born in London, England, on March 21, 1958. From the moment his star first shined as Sex Pistols bassist Sid Vicious in Sid and Nancy (1986), Oldman has brought a raw, powerful edge to his roles, which have run the gamut from Dracula to Beethoven to Lee Harvey Oswald. He earned his first Oscar nomination for his work in the 2011 remake of Tinker, Tailor, Soldier, Spy, and claimed Golden Globe and Academy Award wins for his portrayal of Winston Churchill in Darkest Hour (2017).

Leonard Gary Oldman was born in London, England, on March 25, 1958. The son of a welder and a homemaker, Oldman grew up in a hardscrabble working-class neighborhood of south London. His childhood and later adult years were framed by the absence of his father, who left the family when Oldman was just 7 years old.

Hardly a committed student, Oldman dropped out of school at the age of 16, when he found work as a store clerk. But after discovering his ability to perform on stage, Oldman returned to the classroom and enrolled at the Young People's Theatre in Greenwich, England. He then earned a scholarship to attend the Rose Bruford College of Theatre and Performance in London, earning his bachelor's degree in 1979.

For much of the early 1980s, Oldman kept pace with a frenzied theater schedule. For the young actor, though, the hard work paid off. Among the recognition he received from this period was the coveted Fringe Award for Best Newcomer of the 1985-86 season for his role in The Pope's Wedding.

Gary Oldman's big introduction to mainstream audiences came as Sid Vicious in the film Sid and Nancy (1986). Critics praised Oldman for his portrayal of the mercurial punk rocker. His followup role as the gay playwright Joe Orton in Prick up Your Ears (1987) won him equal praise.

Oldman has been hailed for his versatility. His ability to make himself a believable Lee Harvey Oswald in JFK (1991), and then turn around and command the screen as Dracula in Francis Ford Coppola's Bram Stroker's Dracula (1992), is evidence of this.

For much of the 1990s, Oldman's talents were on full display. His films included The Scarlet Letter (1995), The Fifth Element (1997) and Air Force One (1997). In 1998, he moved behind the camera as director of Nil by Mouth, a heartbreaking look at the life of one working-class family in south London. For Oldman, who also wrote the script, the film touched some familiar ground, mirroring in some respects the troubled, up-and-down life he'd known as a child.

As the 2000s took shape, Oldman's career continued to roll forward. He took on the role of Sirius Black in the Harry Potter franchise, and starred as Sergeant-turned-Commissioner James Gordon in Christopher Nolan's Batman trilogy. He also contributed his voice to such animated fare as Planet 51 (2009) and Kung Fu Panda 2 (2011).

Following more than two decades of acclaimed work, Oldman earned his first Oscar nomination for his role in the 2011 remake of Tinker, Tailor, Soldier, Spy. He also featured prominently in the remakes of RoboCop and Dawn of the Planet of the Apes, both released in 2014.

In 2017, Oldman delivered a resounding performance as former British Prime Minister Winston Churchill in Darkest Hour, earning Golden Globe and Oscar wins for Best Actor. Despite previously dismissing the Globes as "meaningless," he was more gracious upon hearing his name called during the 2018 ceremony, saying, "I feel very humbled and surprised to have been asked to this stage."

The actor seemed similarly humbled upon receiving the Best Actor Academy Award, giving a shout out to his 98-year-old mother in his speech: "She’s watching the ceremony from the comfort of her sofa," he said, adding, "I say to my mother thank you for your love and support. Put the kettle on, I’m bringing Oscar home."

For Oldman, a recovering alcoholic who claims he once drank two bottles of vodka a day, professional triumphs have sometimes been met with personal setbacks. He's been married to actresses Leslie Manville and Uma Thurman, as well as model Donya Fiorentino. He also tied the knot with singer Alexandra Edenborough in 2008, but the couple split in 2014 and officially called it quits in 2015.

In the wake of the sexual abuse allegations that sparked the #MeToo movement in late 2017, Oldman found his past behavior in the spotlight with a report that his ex-wife Fiorentino had accused him of assault. Oldman referred to the charges as "lies, innuendoes and half-truths."

Oldman, who resides in both Hollywood and London, has three boys: He fathered Alfie with Manville, and Gulliver and Charlie with Fiorentiono.