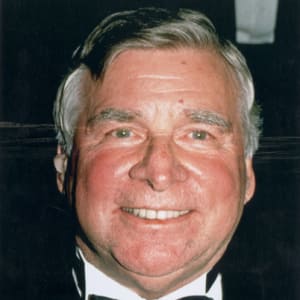 Born on August 19, 1921, in El Paso, Texas, Gene Roddenberry was a World War II Army Air Corps pilot before becoming a television writer and producer. He created the highly influential Star Trek television series, which spawned six feature-length films with the original cast. The franchise continued to expand with new movies and characters even after Roddenberry died of cardiac arrest on October 24, 1991.

Eugene Wesley Roddenberry was born on August 19, 1921, in El Paso, Texas, and raised in Los Angeles, California. He joined the Army Air Corps after studying law enforcement at Los Angeles City College and flew 89 missions during World War II, earning the Distinguished Flying Cross and the Air Medal. While stationed in the South Pacific, he contributed stories and poetry to publications.

After the war, Roddenberry took a job as a commercial pilot for Pan American World Airlines before moving back to Los Angeles to pursue a career as a television writer.

Where No Man Had Gone Before

Gene Roddenberry worked as a Los Angeles Police Department spokesman and as a speechwriter for Chief William H. Parker in the early 1950s as he attempted to gain a foothold in the entertainment industry. Fortunately, the LAPD regularly consulted for the police show Dragnet, giving Roddenberry the opportunity to develop his scriptwriting chops. He earned his first official television credit for an episode of Mr. District Attorney, and over the next decade he wrote for programs such as West Point, Naked City and Have Gun, Will Travel, for which he won his first Emmy Award.

In the mid-1960s, Roddenberry began work on a science-fiction show that he pitched as Wagon Train set in space. His original pilot was rejected by NBC as "too cerebral," but he was given another chance and in September 1966 the first episode of Star Trek aired. Featuring a diverse cast that included William Shatner, Leonard Nimoy and George Takei, the show followed the U.S.S. Enterprise crew on its five-year mission to "boldly go where no man has gone before" in the far reaches of the galaxy. Although Star Trek found a loyal cult following, it was canceled in the summer of 1969 after 79 episodes.

Roddenberry stuck with the science-fiction theme as a writer and producer for the TV movies Genesis II (1973), Planet Earth (1974) and The Questor Tapes (1974). Meanwhile, Star Trek was enjoying a surge in popularity thanks to syndicated reruns and an animated version, and in 1975 Roddenberry was tapped to revive the franchise under the name Star Trek: Phase II. Executives elected to rush a feature-length film into production, and in 1979, the special effects-laden Star Trek: The Motion Picture opened to mixed reviews. Five sequels with the original cast followed, though Roddenberry had limited involvement after the first film as an "executive consultant."

On September 4, 1986, Roddenberry became the first writer/producer to be honored with a star on the Hollywood Walk of Fame. He was an executive producer for Star Trek: The Next Generation, which became a huge hit following the series' launch in 1987. In 1990, he was honored with the Jack Benny Memorial Award of lifetime achievement by the March of Dimes.

Roddenberry went into cardiac arrest and passed away on October 24, 1991. His influence on popular culture was enormous; Star Trek became the first TV series to have an episode preserved in the Smithsonian Institution, and NASA named one of its space shuttles Enterprise. Four Next Generation movies and several television spin-offs were released in the years after Roddenberry's death, and in 2009 a Star Trek reboot was a box-office smash, proving that its characters and themes remained as beloved as ever. The reboot series continued with the blockbusters Star Trek Into Darkness (2013) and Star Trek Beyond (2016).