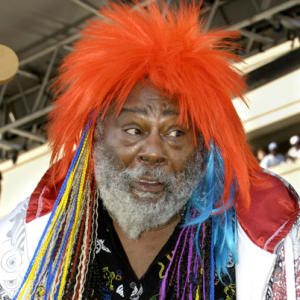 George Clinton and his band Parliament-Funkadelic revolutionized funk sounds and came up with No. 1 singles like “Flash Light” and “One Nation Under a Groove.” His first solo album, ‘Computer Games,’ was a hit in the early ’80s and featured another No. 1 track “Atomic Dog.”

Musician George Clinton was born in Kannapolis, North Carolina on July 22, 1941. His music career began in a barbershop where he created a doo-wop group called The Parliaments. Clinton eventually reorganized the musicians who would become known as Funkadelic and Parliament to create new sounds and dazzling, out-of-this-world live shows with R&B chart toppers like "Flash Light," "Aqua Boogie" and "One Nation Under a Groove." He later embarked on a solo career, releasing the album Computer Games in 1982 as well as additional studio projects.

George Clinton was born on July 22, 1941, in Kannapolis, North Carolina. Raised in Plainfield, New Jersey, Clinton began his music career in the 1950s while working at a barbershop in Newark, New Jersey. Having also been influenced by mambo, he founded a doo-wop singing quintet he called the Parliaments out of the shop's backroom. When Clinton headed to Detroit in the early 1960s to work as a staff songwriter for Berry Gordy's Motown, the group stayed in New Jersey but continued to work together long distance.

Landing a deal with Revilot Records, the Parliaments turned out their first hit in 1967 with the single "(I Just Wanna) Testify," which landed at No. 3 on the Billboard R&B charts. The only member of The Parliaments to actually appear on the recording, however, was Clinton; no one else was able to travel to Detroit for the session, so studio musicians filled in.

When Revilot went bankrupt later that year, the group's name became tied up in litigation. In 1968, they renamed themselves Funkadelic, after Clinton's backup band. In 1972, when Clinton was finally able to get back the Parliament name, the group began using both the Parliament and Funkadelic monikers, but under different record labels. Often referring to himself as "the Referee," Clinton mixed and matched the musicians and singers in his groups, which helped maintain a fresh, innovative sound.

Inspired by the sounds of revolutionary bands like the Stooges and MC 5 as well as musicians Jimi Hendrix, Frank Zappa and Sly Stone, Clinton began looking for ways to experiment with his musical compositions. Parliament explored and invented new sounds through funk—a twist on soul that included psychedelic guitar, deep bass groove and out-of-the-box sound effects—while Funkadelic cultivated a rock sound.

Eventually featuring contributions from prominent band members Bernie Worrell and Bootsy Collins, Clinton and Parliament-Funkadelic released more than 40 R&B hit singles and several gold and platinum albums during the '70s, all while cultivating an otherworldly, edgy aesthetic partially inspired by sci-fi. Their output included such albums like Mothership Connection (1975), Chocolate City (1975), The Clones of Dr. Funkenstein (1976) and Motor Booty Affair (1978) as well as the R&B top 10 hits "Tear the Roof Off the Sucker (Give Up the Funk), "Flash Light," "One Nation Under a Groove," "Aqua Boogie" and "(Not Just) Knee Deep," with the latter four singles topping the charts.

But as the musical powerhouse reached the '80s, Clinton became weighed down by legal difficulties arising from Polygram's acquisition of Parliament's label, Casablanca. Clinton was forced to rename the groups again in 1982, this time signing to Capitol as a solo act and as the P.Funk All-Stars.

His first solo album, Computer Games (1982), was a hit and contained the Top 20 single "Loopzilla" as well as the No. 1 R&B classic "Atomic Dog," a dance club staple which would later become a popular sample for future recording artists. Clinton stayed with Capitol for three more years, releasing more Top 40 singles including "Nubian Nut" and "Do Fries Go With That Shake?" But as the '80s rolled on, Clinton and his group faced a decline in popularity. Nonetheless, Clinton was able to sign with another revered disciple of funk, the one and only Prince, and released 1989's The Cinderella Theory and 1993's Hey Man, Smell My Finger under the Paisley Park label.

In the 1990s, Clinton's music experienced a resurgence as rappers such as Snoop Dogg and Tupac Shakur began sampling his work. In 1996, Clinton released Greatest Funkin' Hits, which featured an array of his most prominent songs remixed with contemporary artists. The following year, he received an induction into the Rock and Roll Hall of Fame along with 15 other members of Parliament-Funkadelic.

Clinton continued to record into the new millennium, releasing such albums as 2004's 500,000 Kilowatts of P-Funk Power and 2008's George Clinton and His Gangsters of Love. In 2014, the pioneering musician released his tell-all autobiography Brothers Be, Yo Like George, Ain't That Funkin' Kinda Hard on You?