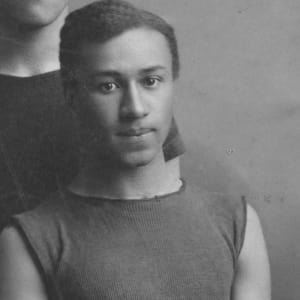 In 1904, track and field athlete and scholar George Coleman Poage became the first African-American to win a medal at the Olympic Games.

Born on November 6, 1880 in Hannibal, Missouri, George C. Poage eventually moved to La Crosse, Wisconsin, with his family, where he became a star student and track and field athlete. After graduating from the University of Wisconsin-Madison, Poage competed in the 1904 Olympics and earned two bronze medals, becoming the first African-American to win a medal at the games. He later worked as an educator, farmer and postal clerk. Poage died on April 11, 1962 in Chicago, Illinois.

George Coleman Poage was born on November 6, 1880, in Hannibal, Missouri. (Several sources list his year of birth as 1880, including the official Olympic Games site; however, he also stated his birth year was 1882 on a job application.) He was one of several children born to Anna and James Poage, with the family relocating to La Crosse, Wisconsin when George was still a toddler. After the death of Poage’s father and two of his siblings, he and the remainder of his family moved into the home of Mary and Lucian Easton, for whom his mother worked. The Eastons were thought to have been advocates for educating the Poages. George was offered unfettered access to books and his mother ardently supported his learning.

Poage attended La Crosse High School where he was an excellent student. In 1899, Poage was both class salutatorian and the first African-American student to graduate from the school. He was also a skilled track and field athlete, breaking Wisconsin’s 50-yard state record during his senior year.

Poage went on to enroll at the University of Wisconsin-Madison, running varsity track while being given a leadership role on the team and setting additional records. Continuing his academic achievements, with an ability to read several languages, he graduated in 1903 with a degree in history after completing his senior thesis, “An Investigation into the Economic Condition of the Negro in the State of Georgia During the Period of 1860-1900.” Poage stayed on at the university for a year of postgraduate studies and also worked as an on-campus football trainer.

Poage competed in the 1904 Olympic Games, held in St. Louis. Despite calls for black citizens to boycott the games due to segregated seating policies, Poage participated in the competition. On August 31, he came in third for the 400-meter hurdle competition, thus taking the bronze and becoming the first African American to earn a medal at the Olympics. (Later on in the day, African-American athlete Joseph Stadler won a silver medal for the standing high jump.) The following day, Poage came in third again for the 200-meter low hurdles, winning another bronze.

Teaching and Move to Chicago

Poage remained in St. Louis and went on to work as a teacher at Charles Sumner High School for almost a decade. A student of Poage’s, Dr. Julia Davis, later remarked in a booklet that the educator taught Latin and English courses (he had taken additional postgraduate English courses) and was highly skilled in guiding students in theatrical productions, as well as in debate. Poage eventually worked as a farmer for a time in Minnesota before moving to Chicago, where he worked as a postal clerk for more than 20 years. It is believed that the racial biases of the time may have prevented Poage from finding work more in line with his educational background.

Poage, who never married, died on April 11, 1962 in Chicago, Illinois. To help honor the Olympian’s accomplishments, which many have felt has been lost to history, the city of La Crosse gave its Hood Park the new moniker George C. Poage Park in 2013.