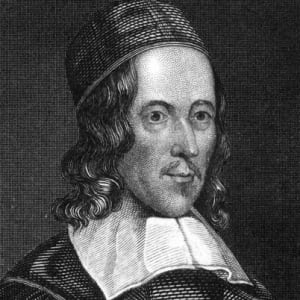 George Herbert was an ordained priest and poet. In 1633, his book The Temple: Sacred Poems and Private Ejaculations was published posthumously.

George Herbert was born on April 3, 1593, in Montgomery Castle, Wales. In 1620, he was elected orator of the University of Cambridge. By the following decade, however, he had left that post and become ordained priest. Herbert served two small, civil parishes located in Wiltshire, England, Fugglestone St. Peter and Bemerton. He also wrote a number of religious poems over the years, which he sent to friend Nicholas Ferrar. In 1633, Ferrar had The Temple: Sacred Poems and Private Ejaculations published. Herbert died in Bemerton, Wiltshire, England, on March 1, 1633.

Born into a prominent family on April 3, 1593, in Montgomery Castle, Wales, George Herbert was an English poet who largely yearned for acclaim for his work after his death. One of 10 children, he lost his father, Sir Richard Herbert, at age 3. His mother, Magdalen, moved the family to England, where she became a patron of the poet and clergyman John Donne. Herbert soon displayed his own gift for poetry, penning his earliest known works in her honor after her marriage to Sir John Danvers in 1609.

Herbert studied at Westminster School and then attended Trinity College at Cambridge University, where he demonstrated his writing talents. He earned his bachelor's degree in 1613 and his master's degree in 1616. Herbert remained with the university after graduation as a fellow before becoming its public orator in 1620. He acted as a sort of an ambassador for the school in this role, writing and delivering speeches to King James.

While still at the university, Herbert became an ordained deacon in 1624. His mother died in 1627 and he expressed his grief in verse, penning several poems in tribute to her. Herbert also resigned his post at Cambridge that same year. He married Jane Danvers in 1629.

Herbert devoted himself to religion in 1630 by taking responsibility for the parish of Fugglestone-cum-Bemerton, where he spent the final three years of his life. He wrote about this experience in A Priest to the Temple; or, The Country Parson, His Character and Rule of Holy Life, which was published after his death.

While dying from tuberculosis, Herbert sent a collection of his poems to his friend Nicholas Ferrar. Shortly after Herbert passed away on March 1, 1633, Ferrar had the poems published in a book titled The Temple: Sacred Poems and Private Ejaculations. This collection featured such works as "The Altar," "The Storm" and "Love."