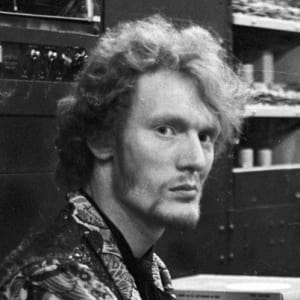 Considered one of the greatest drummers of all time, Ginger Baker played with the bands Cream and Blind Faith. He is known for using two bass drums in his kit.

Peter "Ginger" Baker was born in London in 1939. He began playing drums as a teen, and by age 16 he was touring. He formed the band Cream in 1966, and when it dissolved, he formed Blind Faith. Ginger Baker's next years were marked by addiction and fights with bandmates, and he fled to Nigeria to get clean. Financial troubles ultimately drove him to settle in South Africa, where he still lives and raises polo ponies.

Ginger Baker was born as Peter Edward Baker on August 19, 1939 in London, England. He grew up in a poor family; his mother worked in a tobacco shop, and his father was a bricklayer who was killed in World War II. Rambunctious at an early age, he spent his youth focused on cycling until he discovered the drums at the age of 15. At 16, he left school and began touring with jazz bands.

As he passed through several bands on the London jazz scene, Baker took too easily to the hard-partying lifestyle: He was drinking heavily, doing drugs, crashing cars and getting in trouble with the police. In 1959, he met and married Liz Finch, with whom he had two daughters and a son.

In 1962, Baker joined Alexis Korner's Blues Incorporated, followed by the Graham Bond Organisation in 1963. It was here that hostilities first developed between Baker and bass player Jack Bruce. The two became known for sabotaging each other's instruments and fighting on stage, and Bruce was ultimately forced out of the band.

Baker met Eric Clapton in 1966, and Clapton suggested they recruit Jack Bruce for a new band. Despite their tumultuous history, Baker agreed, and Cream was formed. The band dissolved in 1968, in large part because of the animosity between Baker and Bruce. Shortly after the break-up of Cream, Baker and Clapton joined with Steve Winwood and Ric Grech to form Blind Faith. The band was an instant success, but lasted less than a year.

Baker and Winwood went on to form the fusion band Ginger Baker's Air Force in 1970. That same year, Baker suffered a near-fatal overdose—on the night his friend Jimi Hendrix died—and he decided to leave the music scene to get clean. He went to Lagos, Nigeria, set up a music studio and learned to play polo. Baker's experience in Africa is documented in the 1971 documentary Ginger Baker in Africa. He made enemies there, and was ultimately forced out of Nigeria by his business partners. He sold his studio at a loss, and with little cash left, returned to London and started selling cocaine.

By this point, Baker was estranged from his wife and in debt for back taxes. He fled to Italy with his 22-year-old girlfriend at the time, in hopes of succeeding at olive farming. The trip led to another failed marriage and more head-bumping with neighbors, this time in the form of disagreements with the mafia, and Baker was soon accused of selling drugs. After someone killed one of his dogs in 1988, Baker returned to the United States, and settled in Los Angeles.

In L.A., Baker intended to become an actor. He had little success in the industry, but he married for the third time. His stint in L.A. was short-lived; after he settled a lawsuit with his recording company over royalties, he moved to Colorado in 1993 to raise polo ponies, the same year that he and his Cream bandmates were elected to the Rock and Roll Hall of Fame. Friends called Baker's work with polo ponies his "new expensive habit," and he soon found himself broke again. When he encountered problems with the IRS in the late 1990s, he sold his ranch and moved to South Africa, ultimately settling in the wine country of Tulbagh.

In 2009, Baker published his autobiography, Ginger Baker: Hellraiser, which he called an attempt to set the record straight. In it, he also announced that he has a degenerative spine condition and emphysema. The following year, he married Kudzai Machokoto, a Zimbabwean woman 42 years his junior, who had been helping to take care of him.

A documentary about Baker's life, Beware of Mr. Baker, debuted at South by Southwest in 2012.