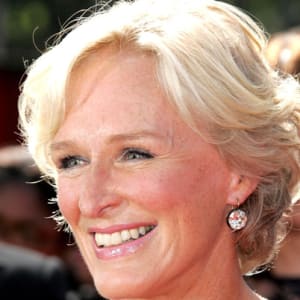 Actress Glenn Close is best known for her many Oscar-nominated roles, like the psychotic mistress in the 1987 movie Fatal Attraction.

Actress Glenn Close is best known for her many Oscar-nominated roles, like the psychotic mistress in Fatal Attraction and, more recently, in an Emmy award winning role on FX's Damages. In her career Close has been Oscar nominated five times, won three Tonys, an Obie, three Emmys, two Golden Globes, and a Screen Actors Guild Award.

Glenn Close was born on March 19, 1947, in Greenwich, Connecticut, into an upper class family with a long history in the northeastern United States. She grew up with two sisters, Jessie and Tina, and one brother, Sandy. Although her parents, Dr. William Close and Bettine Moore Close, were both born into an elite social circle, they did not raise Close and her siblings in that world. "My parents were real black sheep in Greenwich. The milieu was highly social and very elite, and we had that as our heritage – my grandparents founded Round Hill Country Club. But we never participated in that kind of a life. I've always been a little bit proud of that fact," Close explains.

In 1954, Close's parents joined Moral Rearmament (MRA), a group with cult-like trappings that sent its members out into the world to convert people to its brand of spirituality. When Close was thirteen, her parents moved the family to the Belgian Congo (now the Democratic Republic of the Congo) to spread the word; Dr. Close also operated a clinic there. Close split her time between Africa and boarding schools in Switzerland. She later attended the prep school Rosemary Hall back in Greenwich before joining the MRA-associated singing group Up With People, with which she toured throughout Europe and the United States for four years. Close broke away from the group at age 22 in order to attend the College of William and Mary, where she studied drama and anthropology. After college, Close moved to New York City. There, she and good friend Meryl Streep joined the Phoenix Theatre Company.

Close soon began her acting career in earnest. She made her Broadway debut in 1974's Love for Love. At first, she loved the stage so much that she did not seriously consider film acting. "I went into acting just thinking about the stage. All the games I used to play as a child, I never even thought about movies." Close's talent, though, translated well to the silver screen. In 1980, after seeing her in a Tony-nominated role in Barnum, director George Roy Hill cast Close as Jenny Fields, a feminist writer, in his film The World According to Garp. For her first film role, Close received an Academy Award nomination; it was the first of five for her in the 1980s.

Glenn Close's reputation as a powerful dynamo in Hollywood was cemented by her role in the thriller Fatal Attraction, that of Alex Forrester, a seductive but psychotic stalker. During filming, Close found out that she was pregnant with her first and only child, Annie Maude Starke, whose father is John Starke. Only seven weeks after giving birth to Annie, Close started filming a lead role in the film Dangerous Liaisons, for which she received another Oscar nomination.

By the 1990s, Close was in her forties, an age when many actresses have a difficult time finding roles. Many are typecast as mothers, and Close couldn't entirely avoid this: in fact, she played Gertrude to Mel Gibson's Hamlet in the 1990 film version despite being only eight years older than him. Close was lucky, though, and for the most part still had her pick of roles in film and television. Nevertheless, she frequently returned to her first love, the theater. She won two Tonys for Best Actress, one in 1992 for Death and the Maiden, and one as Andrew Lloyd Weber's handpicked Norma Desmond in the 1995 revival of Sunset Boulevard. She also took more comedic roles, such as Cruella de Vil in 1996's live-action 101 Dalmatians and First Lady Marsha Dale in 1996's Mars Attacks!. Close also had a recurring voice-acting role on the animated television show The Simpsons as Mona Simpson, Homer's estranged mother.

In the 2000s, Glenn Close has primarily focused on television, taking a role in The Shield's fourth season and guest starring on the critically acclaimed drama The West Wing. In 2007, she took a starring role in Damages as lawyer Patty Hewes, and the show has been renewed for a fifth season. "It's rare to have a woman, a mature woman, in a position of real power where she's calling the shots and she's in with the big guys," Close explains. "It's fun." The decade was an important one for Close's personal life, as well: Close married David Shaw on February 3, 2006. She was previously married to Cabot Wade from 1969 to 1971, and to James Marlas from 1984 to 1987.

Despite being one of the most critically acclaimed actresses working today, Glenn Close has no interest in the trappings of fame, and keeps her private life well-guarded. "I don't feel like I'm a public person, and I didn't go into my craft thinking I'm going to, you know, fling myself around as me. It doesn't interest me… I read how [Jackie Kennedy] told her daughter that once you've articulated something in public, it doesn't belong to you anymore. Cold shivers down my back." Because Close's talents are suited to film, television, and theater alike, her career continues to be full of possibility, a fact which delights fans and critics alike.