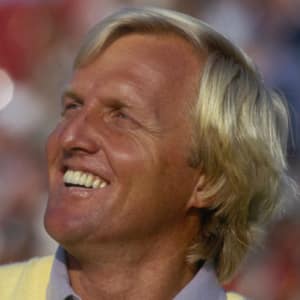 Despite his successes, Australian golfer Greg Norman earned a reputation for his inability to sustain leads in several major tournaments.

Born on February 10, 1955, in Mount Isa, Australia, Greg Norman became a professional golfer despite a late introduction to the sport. "The Great White Shark" compiled 91 pro victories and was inducted into the World Golf Hall of Fame in 2001, but also endured a series of high-profile defeats. A successful businessman, Norman founded Great White Shark Enterprises to oversee his ventures.

Gregory John Norman was born on February 10, 1955, in Mount Isa, Queensland, Australia. He played rugby and Australian Rules football while growing up, but became hooked on golf at age 15 after serving as a caddy for his mom, Toini. Within a couple of years he was playing to a scratch handicap, and after participating in a series of amateur events, he turned pro at age 21 in 1976.

Norman earned his first professional tour victory at the West Lakes Classic in 1976, and impressed at the 1977 Martini International to claim his first European Tour victory. He made a splash in his first Masters Tournament in 1981, earning the nickname "The Great White Shark" for his aggressive approaches, before finishing fourth.

Norman began competing on the American PGA Tour full-time in 1983, and won the Kemper and Canadian Opens the following year. He became known as one of golf’s more charismatic figures, but also developed a reputation for his inability to close out victories when the pressure mounted. In 1986, Norman entered the final day of play with the lead in all four major tournaments, but lost three of them. He suffered an agonizing defeat on the heels of Larry Mize's miracle 45-yard pitch shot in the 1987 Masters playoff, and submitted perhaps the most notorious collapse of his career on the same course nine years later, when his six-stroke lead vaporized with a final-round 78.

Despite his highly publicized shortcomings, Norman enjoyed tremendous success in the sport. His 91 professional victories include two British Open championships, and he was ranked the No. 1 player in the world for a total of 331 weeks in the 1980s and '90s. In addition, he led the PGA Tour in earnings and scoring average three times each, and was named its "Player of the Year" in 1995.

Norman's level of play diminished after he suffered a shoulder injury in the late 1990s, but he continued to compete regularly, and was honored with induction into the World Golf Hall of Fame in 2001. Even after turning 50 and earning qualification to the Champions Tour, the aggressive Australian occasionally teed off against the top players that succeeded him, including Tiger Woods and Phil Mickelson, on the regular PGA Tour.

Norman established his Greg Norman Golf Course Design company in 1987, and expanded into other business avenues even as he maintained his full-time touring schedule.

He founded the Greg Norman Collection clothing line in 1992, and made his foray into the wine industry with the formation of Greg Norman Estates in 1996. Today, the golfing great maintains his thriving business interests under the umbrella of Great White Shark Enterprises.