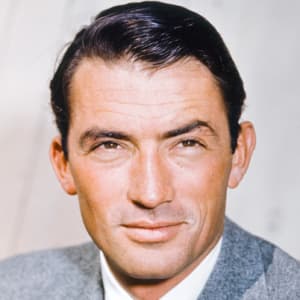 Gregory Peck is best known for his larger-than-life film roles, particularly as Atticus Finch in To Kill a Mockingbird.

Born in La Jolla, California, in 1916, Gregory Peck studied pre-med at the University of California, Berkeley. He began acting while in college, and soon after moved to New York to further his interest. After several best actor nominations, Peck eventually won an Oscar for his portrayal of Atticus Finch in To Kill a Mockingbird. He also starred opposite Audrey Hepburn in her debut in Roman Holiday, as well as many other notable films during his length career. Peck died in Los Angeles in 2003.

Gregory Peck was born on  April 5, 1916, in La Jolla, California. His parents, Bernice "Bunny" Mae and Gregory Pearl Peck, separated when he was three and divorced several years later. As their marriage broke apart, young Gregory was primarily raised by his maternal grandmother. At the age of 10, Peck attended St. John’s Catholic Military Academy in Los Angeles before returning to live with his father while attending San Diego High School.

After graduating, Peck enrolled in the pre-med program at the University of California, Berkeley. It was there that he became interested in acting and appeared in several school plays. By the time he graduated in 1939, he had abandoned his plans to become a doctor and headed to New York City to pursue his passion for acting, winning a scholarship to the Neighborhood Playhouse, where he studied with notable instructor Sanford Meisner.

While earning his living working various odd jobs around New York City, in 1942 Peck made his Broadway debut in The Morning Star. Though the production was not well received by audiences, Peck earned critical acclaim for his acting and his career began to blossom. Peck also married for the first time, to Greta Kukkonen, with whom he would have three children before their divorce in 1954.

In 1944, Peck landed a role in his first Hollywood film, Days of Glory, playing a Russian guerrilla fighter. His fame grew following the film's release and continued to flourish later that year, with The Keys of the Kingdom, in which he played a missionary priest and earned his first in a flurry of Academy Award nominations. For his performance as a veteran of the Civil War in The Yearling (1946), Peck received his second Oscar nod, followed by a 1948 best-actor nomination for his portrayal of Philip Schuyler Green in Elia Kazan's Gentleman's Agreement, a film about a reporter who pretends to be Jewish in order to cover a story on anti-Semitism.

With his notable talents and rugged good looks, Peck quickly established himself as one of the era's top leading men, appearing in numerous other notable films during the 1940s and '50s. Among his most memorable from this period were Alfred Hitchcock's Spellbound (1945), the World War II feature Twelve O'Clock High (1949)—for which he received his fourth Oscar nomination—and the romantic comedy Roman Holiday (1953), in which he starred opposite Audrey Hepburn in her big-screen debut. Peck also appeared as Captain Ahab in the 1956 adaptation of Herman Melville's Moby Dick.

But what is perhaps Peck's best-known role came in 1962's To Kill a Mockingbird, a film based on the acclaimed 1960 novel by Harper Lee. For his iconic performance as Atticus Finch, Peck finally won his first Academy Award.

His place as a Hollywood A-lister secure, for the next several decades Peck starred in films across a wide range of genres. Some highlights include the 1962 noir classic Cape Fear, popular horror film The Omen, MacArthur (1977), The Boys from Brazil (1978), The Sea Wolves (1980) and Other People's Money (1980), to name just a few. Later in his career, Peck also branched out into television work, winning acclaim for his performances in movies and miniseries such as The Blue and the Gray and Moby Dick, playing the part of the character Father Mapple, this time around.

When he wasn't acting, Peck put his energy toward civic, charitable and political efforts, serving as chairman of the American Cancer Society, a board trustee for the American Film Institute and president of the Academy of Motion Picture Arts and Sciences, among other endeavors.

In 1969, President Lyndon Johnson awarded Peck the Presidential Medal of Freedom for his humanitarian efforts, and in 1991 he received Kennedy Center honors. In 1999, the American Film Institute named Peck among the Greatest Male Stars of All Time.

On June 12, 2003, Peck died from bronchopneumonia while asleep at his home in Los Angeles. He was 87 years old. He was survived by his wife of nearly 49 years, Veronique Passani (they were married on December 31, 1955), and their two children, Anthony and Cecilia, as well as his children from his first marriage, Stephen and Carey. His son Jonathan predeceased him 1975.