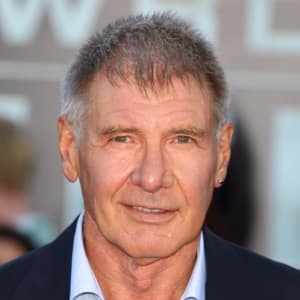 Harrison Ford is one of Hollywood’s leading men, with an acting career that has spanned nearly 40 years and included iconic roles such as Indiana Jones and Han Solo.

Who Is Harrison Ford?

Born in 1942 in Chicago, Illinois, Harrison Ford struggled for years as an actor before George Lucas cast him in 1973's American Graffiti. Ford then hit superstardom as Han Solo in the first three Star Wars films and as Indiana Jones in Raiders of the Lost Ark and its sequels, which were all monster successes. He has enjoyed leading roles in numerous Hollywood films such as Blade Runner, Witness, Working Girl, Patriot Games, The Fugitive and 42, among many others. In 2015 Ford returned to his famed Han Solo role in Star Wars: Episode VII – The Force Awakens.

Breakthrough Films: 'Star Wars' and 'Raiders of the Lost Ark'

Frustrated with his lack of success as an actor, Ford became a carpenter to supplement his income. George Lucas gave him his first important film role in his 1973 drama American Graffiti, but his career failed to progress much. He worked for Francis Ford Coppola as both a carpenter and an actor with small roles in The Conversation (1974) and Apocalypse Now (1979).

In 1977 Ford collaborated with Lucas again for his breakthrough role as Han Solo in Star Wars. His portrayal of the brash but likable rogue in this science-fiction classic helped raise his profile in Hollywood. The film's two sequels, The Empire Strikes Back (1980) and Return of the Jedi (1983), helped make him a star.

Around this time, Ford brought another of his legendary film characters to the big screen. He played resourceful, swashbuckling archaeologist Indiana Jones in 1981's Raiders of the Lost Ark, directed by Steven Spielberg. The action adventure tale, written in part by Lucas, proved to be a huge hit. It spawned several sequels, including Indiana Jones and the Temple of Doom (1984) and Indiana Jones and the Last Crusade (1989). Around the time of the first Indiana Jones installment, Ford also starred as the title character in Blade Runner (1982), a shadowy science-fiction outing directed by Ridley Scott that would become a cult classic.

Ford enhanced his reputation as a dramatic actor with several significant roles in the mid-1980s. He received an Academy Award nomination for his work in 1985's Witness, a crime drama co-starring Kelly McGillis and directed by Peter Weir. The following year, Ford reteamed with Weir to play an offbeat inventor in The Mosquito Coast, with River Phoenix and Helen Mirren. While the project was a commercial disappointment, the film allowed Ford to tackle an unusual and sometimes unlikable character. In 1988 he showed his lighter side in the popular romantic comedy Working Girl, with Melanie Griffith and Sigourney Weaver.

Returning to the role of action hero, Ford starred in 1992's Patriot Games as CIA agent Jack Ryan, the protagonist from the bestselling novels by Tom Clancy. Audiences loved him in the role, which he reprised in 1994's Clear and Present Danger. By this time, Ford had become one of Hollywood's most bankable stars. He earned $20 million per film with 15 percent of the film's gross take at the box office at his peak.

After years of blockbuster success, Ford stumbled through a few missteps in the mid-to-late 1990s. He starred in the disappointing remake of the 1954 dramatic comedy Sabrina with Julia Ormand and Greg Kinnear. Co-starring with Brad Pitt, Ford saw his 1997 crime thriller The Devil's Own fall flat. But he proved that his box office prowess had not faded with his turn as president of the United States in the hit action thriller Air Force One that same year. Other dramas he starred in around this time include Presumed Innocent (1990), Regarding Henry (1991) and the horror film What Lies Beneath (2000) with Michelle Pfeiffer.

In the early 2000s, Ford took on fewer movie roles. The parts he did play had mixed results. He partnered with Josh Hartnett for 2003's Hollywood Homicide, a lighthearted crime drama that received a tepid reception from moviegoers. In 2006 his thriller Firewall came and went with little notice. Ford then returned to form with one of the franchises that made him famous in 2008. Indiana Jones and the Kingdom of Crystal Skull reached the top spot at the box office its opening weekend, going on to earn more than $786 million worldwide.

Ford took on an unusual form of action film in 2010 with Cowboys & Aliens, facing off against Daniel Craig. That same year, his comedy Morning Glory with Rachel McAdams and Diane Keaton fared well at the box office. In 2013 he showed his dramatic talents in 42, a film about the life of African-American baseball legend Jackie Robinson. Ford plays Branch Rickey, the baseball executive who signed Robinson to the baseball's major leagues. He also appeared in the science-fiction adventure Ender's Game and the thriller Paranoia, both in 2013.

In late April 2014, Ford delighted film fans everywhere with the news that he would appear in Star Wars: Episode VII, the latest installment in the long-running popular series. The cast also includes his earlier Star Wars co-stars Carrie Fisher and Mark Hamill. The film, directed by J.J. Abrams, opened in the U.S. on December 18, 2015 and broke an array of box office records, earning more than $247 million domestically in its opening weekend.

Harrison Ford was married to his college girlfriend Mary Marquardt from 1964 to 1979. The couple have two sons together. He married screenwriter Melissa Mathison in 1983. They met during the making of 1979's Apocalypse Now. They had two children together before separating in 2001 and finalizing their divorce in 2004. Ford has been romantically involved with actress Calista Flockhart since 2002. The couple married in 2010.

A longtime pilot, Ford made headlines in March 2015 when he was involved in a plane crash. He was forced to make a crash landing on a golf course in Venice, California, after experiencing engine trouble. He had run into problems with his vintage aircraft shortly after taking off from California's Santa Monica Airport on March 5. According to the New York Daily News, Ford broke his ankle and pelvis in the crash, with both injuries requiring surgery.

In November 2017, Ford was back in the news over another vehicle mishap, this time for assisting a driver who had swerved off Highway 126 in Santa Paula, California. Ford, in the area after reportedly using his plane at the nearby airport, rushed to the accident scene with a few other bystanders and helped the driver out of her car.

"He acted as a good Samaritan, just like everybody else, and tried to help before emergency services arrived," said an officer at the scene.

Born on July 13, 1942 in Chicago, Illinois, actor Harrison Ford has starred in some of Hollywood's biggest films, including Star Wars and Raiders of the Lost Ark. He grew up in Des Plaines, a suburb of Chicago, as the son of an advertising executive and a stay-at-home mother. As a child, Ford was targeted by bullies. He went to Maine Township High School where he was involved in the social sciences and model train clubs, according to People magazine.

After graduating in 1960, Ford studied English and philosophy at Ripon College in Wisconsin. There, he discovered an interest in performing nearly by accident. Ford signed up for a drama course, hoping for an easy good grade. "I was terrified to get up in front of people, but I really enjoyed the storytelling part," he explained to People.Ford wasn't the best student in college, and he ended up leaving before completing his degree. With his future wife, Mary Marquardt, he made his way to Hollywood in the mid-1960s. Ford first landed a deal with Columbia Pictures as a contract player, earning $150 a week. He then ended up at Universal. In 1966 Ford made his film debut in a bit part in Dead Heat on a Merry-Go-Round. Studio executives were less than impressed. One studio official said, "You'll never make it in this business," Ford told the Hollywood Reporter.