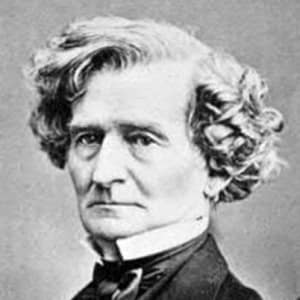 Hector Berlioz was born in France on December 11, 1803. He turned his back on a career in medicine to follow his passion for music, and went on to compose works that showcased the innovativeness and search for expression that were hallmarks of Romanticism. His well-known pieces include the Symphonie fantastique and Grande messe des morts. At the age of 65, Berlioz died in Paris on March 8, 1869.

Louis-Hector Berlioz was born on December 11, 1803, in La Côte-St-André, Isère, France (near Grenoble). Hector Berlioz, as he was known, was entranced with music as a child. He learned to play the flute and guitar, and became a self-taught composer.

Heeding his physician father's wishes, Berlioz went to Paris in 1821 to study medicine. However, much of his time was spent at the Paris-Opéra, where he absorbed Christoph Willibald Gluck's operas. Two years later, he left medicine behind to become a composer.

Beginning a Career in Music

In 1826, Berlioz enrolled at the Paris Conservatoire. The next year, he saw Harriet Smithson in the role of Ophelia and became captivated by the Irish actress. His ardor inspired the Symphonie fantastique (1830), a piece that broke new ground in orchestral expression. With its use of music to relate a story of desperate passion, it was a hallmark of Romantic composition.

Following three unsuccessful attempts to win the Prix de Rome, Berlioz finally succeeded in 1830. After spending more than a year in Italy, he headed back to Paris, where a performance of his "fantastic symphony" took place in 1832. Smithson attended the concert; after meeting the woman who had haunted him, Berlioz married her the next year.

The 1830s saw Berlioz produce more of his inventive compositions, such as the symphony Harold en Italie (1834) and the impressive choral work Requiem, Grande messe des morts (1837). However, an opera, Benvenuto Cellini (1838), flopped. Berlioz was often forced to rely on music criticism and other writing jobs to make ends meet, though a large financial gift from violinist Niccolò Paganini helped him write the choral symphony Roméo et Juliette (1839). That same year he was appointed as a deputy librarian at the Paris Conservatory. Around this time, he began making a comfortable living off of being a music critic, but he found himself feeling artistically frustrated since he was spending less time working on his own compositions.

In the 1840s, touring throughout Europe began to offer Berlioz another source of income; he was particularly appreciated as a conductor in Germany, Russia and England. When the production of another choral work, La Damnation de Faust, became a financial sinkhole after its premiere in 1846, touring again came to the rescue.

Berlioz found his financial footing in the 1850s, when his L'Enfance du Christ (1854) was a success and he was elected to the Institut de France, thus enabling him to receive a stipend. He wrote Les Troyens, inspired by Virgil's Aeneid, at this time, but only got to see a few of the opera's acts be performed in 1863. He also returned to William Shakespeare once more, creating the opera Béatrice et Bénédict (based on Much Ado About Nothing), which had a successful debut in Germany in 1862.

Hector Berlioz left behind many innovative compositions that had set the tone for the Romantic period; though the originality of his work may have worked against him during his lifetime, appreciation of his music would continue to grow after his death.