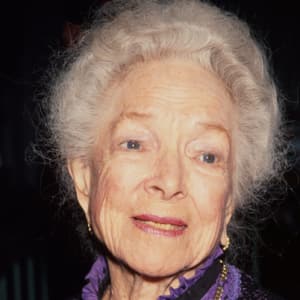 Helen Hayes was an American actress best known for being one of two women to have received all four entertainment awards: an Emmy, a Grammy, an Oscar and a Tony.

Helen Hayes was an American actress born on October 10, 1900, in Washington, D.C. The accomplished entertainer acted from age 5 to 85. She appeared on Broadway at age 8, and over the next several years, she received much acclaim for her performances. With the expansion of movies in Hollywood, Hayes moved to California to pursue films. In 1931, she won a Best Actress Academy Award for The Sin of Madelon Claudet. Hayes also received accolades for her Broadway performances in Mary of Scotland (1933) and Victoria Regina (1935). She is the first woman to receive all four entertainment awards: an Emmy, a Grammy, an Oscar and a Tony Award. Hayes died on March 17, 1993, in Nyack, New York.

Born on October 10, 1900, in Washington, D.C., Helen Hayes was known as the "First Lady of the American Theater." She spent decades delivering stellar performances on the stage and television and in films. She started acting as a child with the encouragement of her mother, once an aspiring actress herself. At the age of 5, Hayes made her professional debut in a production of The Prince Chap.

Several years later, Hayes made her way to Broadway to appear in Old Dutch in 1909. She soon established a reputation as a talented actress with a knack for comedy. In 1920, Hayes starred in one of her first leading roles as the title character in Bab.

In 1927, Helen Hayes had a major career breakthrough with Coquette. This tragedy showcased her ability to handle serious dramatic material. Hayes soon brought this talent to the big screen in 1931's The Sin of Madelon Claudet. In this emotional melodrama, she stars as a woman who turns to crime to support her son. Hayes won her first Academy Award for this film.

More weighty roles soon followed in two well-received historical dramas. In 1933, Hayes portrayed the tragic royal in Mary of Scotland. She took on one of her most famous roles two years later. Hayes gave her first performance as Queen Victoria in Victoria Regina in 1935. This demanding role called for her to portray the legendary monarch from youth to old age. Over the years, Hayes starred in numerous productions of this drama.

Offstage, Hayes was devoted to her family. She married playwright Charles MacArthur in 1928. They welcomed a daughter, Mary, two years later. The family settled in Nyack, New York, a short time later and adopted a son, James, in 1939.

After decades in the theater, Helen Hayes won her first Tony Award in 1947 for Happy Birthday. She also had a chance to share the stage with her daughter Mary around this time. The pair appeared in Alice-Sit-By-The-Fire in 1946 and Good Housekeeping in 1949. Unfortunately, Mary started to feel ill during Good Housekeeping. She soon learned that she had polio and succumbed to the disease a short time later. Hayes and her husband dealt with their grief in different ways. She dedicated herself to raising funds for polio research and he started drinking heavily.

Hayes suffered another loss in 1956 with the death of her husband. She soon channeled her heartbreak into her work. She appeared with Ingrid Berman in Anastasia. A few years later, Hayes picked up her second Tony Award for another royal role in Time Remembered with Richard Burton.

Hayes retired from the stage in the early 1970s after discovering that she was allergic to the dust found in theaters, but she didn't stop acting. She won her second Academy Award for the 1970 film Airport, and she made numerous television appearances over the years. She had guest roles on such shows as The Love Boat, Highway to Heaven and Hawaii Five-O, in which her son, James, starred.

In 1976, Hayes won a Grammy Award for her work on the best spoken word album Great American Documents along with Henry Fonda, Orson Welles and James Earl Jones. This win made her part of an elusive group of entertainers. Few performers have received all of the top American honors—a Academy Award, a Tony Award, a Grammy Award and an Emmy Award.

Hayes continued to receive special recognition for her contributions to the arts in her later years. President Ronald Reagan gave her the National Medal of Arts in 1988. She also had the distinction of having a group of awards named after her as well. The Helen Hayes Awards honor those who excel in the Washington theatrical scene.

One of Helen Hayes's final triumphs came in 1990 with the publication her autobiography My Life in Three Acts. The memoir became a best seller. By early 1993, Hayes's health had started to fail. She was admitted to a Nyack, New York hospital in early March with congestive heart failure. Hayes died there on March 17, 1993. She was 92 years old.

That June, her son James led a tribute to Hayes at a New York Theater. More than 1,500 people turned out to honor Hayes, including Douglas Fairbanks Jr., Tony Randall, Lynn Redgrave and Jason Robards. The petite actress was remembered for her impressive career and kind nature. According to the Los Angeles Times, Hayes once attributed her success to her own every woman appeal. "I was once the typical daughter, then the easily recognizable wife, and then the quintessential mother …Perhaps I am the triumph of 'Plain Jane.'"