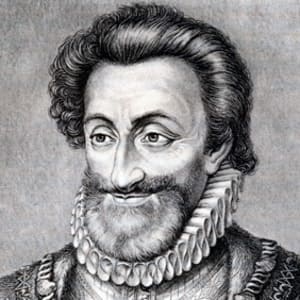 Henry IV granted religious freedom to Protestants by issuing the Edict of Nantes during his reign as king of France, from 1589 to 1610.

Henry IV was born on December 13, 1553, in Pau, France. Raised a Protestant, he became heir to the French throne through his marriage to Margaret of Valois, but was challenged during a time of religious strife. Despite converting to Catholicism after becoming king of France in 1589, Henry IV issued the Edict of Nantes to foster religious tolerance. He was killed on May 14, 1610, in Paris, France.

Henry of Navarre was born in Pau, France, on December 13, 1553. His parents, who became king and queen of Navarre shortly after Henry was born, were of different faiths and exemplified the strife in France between the Huguenots (Protestants) and Catholics. Although Henry was baptized a Catholic, he was raised a Protestant following the death of his father in 1562.

At age 14, Prince Henry began his military service in an expedition against rebellious Roman Catholics in Navarre, which ended in a victory for the Huguenots. Henry distinguished himself and the experience forged a soldierly spirit within him. However, the spread of civil war made him reflect on its disastrous effect on France.

Following the death of his mother in June 1572, Henry became king of Navarre. An arranged marriage to Margaret of Valois, daughter of Henry II and Catherine de' Medici, brought Parisian Catholics and visiting Huguenots together in an uneasy standoff. The tension erupted into the full-scale killings of the St. Bartholomew's Day Massacre on August 24, 1572, and Henry escaped death with the help of his wife and his promise to convert to Catholicism.

War of the Three Henrys

Upon the death of François, Duke of Anjou, in 1584, Henry of Navarre became heir to the throne of France. He was opposed by the Holy League, made up of Catholic aristocrats, and Pope Clement VIII, who excommunicated the French heir from the church. The situation brought about the War of the Three Henrys, pitting Henry of Navarre against King Henry III of France and the staunchly Catholic Henry, Duke of Guise.

Henry of Navarre acted boldly, defeating the army of Henry III in the crucial Battle of Coutras on Oct 20, 1587. Eventually, Spanish interference with French succession prompted Henry III to join forces with Henry of Navarre to take control of Paris and the French countryside. Henry III was stabbed on August 1, 1589, and died the next day after declaring Henry of Navarre his successor.

Henry of Navarre became King Henry IV, but it would take a nine-year siege of Paris to secure his crown from the influence of the Holy League and Spanish interference. He converted to Catholicism, and after winning several key battles, Paris finally capitulated on March 22, 1594. Pope Clement reversed Henry's excommunication, and Henry brokered the Peace of Vervins between France and Spain on May 2, 1598. Around that time, Henry also issued the Edict of Nantes, which confirmed Roman Catholicism as the state religion but granted religious freedom to Protestants.

Having united the kingdom and attained peace at home and abroad, Henry IV proceeded to bring prosperity back to France. He lowered taxes on French citizens, made peace with the Ottoman Empire and opened up trade routes to East Asia. He also became notorious for his sexual exploits, taking on many lovers and earning the nickname "Le Vert Gallant" (The Gay Old Spark).

Despite his accomplishments, Henry IV endured multiple assassination attempts. Considered a usurper by Catholics and a traitor by Protestants, his charm and genuine care for the people's needs could not mollify his enemies. He was stabbed to death by a Catholic fanatic on May 14, 1610, and subsequently buried in the Basilica of Saint Denis in Paris.

In a macabre postscript, the head of Henry IV's embalmed body was reportedly lost after revolutionaries ransacked the Basilica in 1793. The head was passed among private collectors until it was tracked down in 2010, when a team of forensic medical examiners confirmed that it belonged to the former French king. However, that conclusion was cast into doubt a few years later, when DNA tests revealed the head had no royal genetic match.