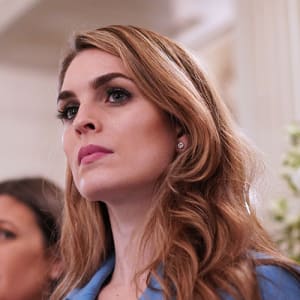 Hope Hicks was the former White House communications director for President Trump and a trusted aide during his presidential campaign. She resigned from her post amid political scandal.

Who Is Hope Hicks?

Hope Hicks (born October 21, 1988) served as a trusted aide and confidante to Donald J. Trump during his presidential campaign and after he entered the White House. She was press secretary during the campaign, became director of strategic communications for the White House and then was named White House communications director. Hicks announced her decision to leave this position on February 28, 2018. Before her foray into politics, she worked in public relations, the third generation of her family to do so.

On February 28, 2018, Hicks announced her resignation as White House communications director. She started in the position in 2017 (she was temporarily appointed in August before being officially given the job in September). Hicks was 28 at the time, making her the youngest person to ever fill the role. Her tenure as communications director in the Trump White House was longer than any of her three predecessors (one of whom, Anthony Scaramucci, left so quickly that he was never sworn in).

In a statement about her departure, Hicks said, "There are no words to adequately express my gratitude to President Trump"; a statement from the president noted, "Hope is outstanding." The New York Times reported that Hicks had been considering resigning for months, and it was known she had not embraced life in Washington D.C.

However, Hicks had also recently been drawn into a scandal regarding former White House staff secretary Rob Porter, whose two ex-wives have accused him of domestic abuse (charges Porter has denied). Hicks, who'd reportedly been dating Porter, was involved in crafting a statement of support that some saw as minimizing domestic violence. The scandal ended up presenting the White House, and its policies regarding security clearances, in a negative light; a CNN reporter would tweet that Hicks had begun contemplating resignation after this.

The day before her resignation, Hicks testified to the House Intelligence Committee as part of its inquiry into possible Russian interference into the 2016 election. Though she would not answer questions about her time in the White House, she talked about the campaign and the transition. It was reported afterward that in her testimony Hicks admitted she had told "white lies" for the president — though she specified she hadn't been deceitful about anything involving the Russian investigation. CNN shared that Trump had been upset by this testimony and berated Hicks for it.

In August 2018, Hicks was seen boarding Air Force One at a New Jersey airport prior to Trump's departure for a campaign rally in Ohio, prompting speculation that she had rejoined the president's staff.

Before becoming communications director, Hicks was a trusted staffer for Trump. She served as press secretary during his presidential campaign, despite having no prior political experience. However, she hadn't pursued the job: in early 2015, Trump called Hicks into his office and, as she related to New York magazine, "Mr. Trump looked at me and said, 'I’m thinking about running for president, and you’re going to be my press secretary.'"

Hicks worked diligently on Trump's presidential campaign, displaying unswerving loyalty to her boss while usually keeping out of the spotlight. In a book by Corey Lewandowski, who'd been one of Trump's campaign managers, it was revealed that she even steamed the candidate's suit — sometimes while he was still wearing it — before events. Hicks also occasionally took dictation of Trump's tweets.

Even as other campaign personnel came and went, Hicks remained a key member of Trump's inner circle. After her boss won the election, she followed him to the White House to become director of strategic communications. There, Hicks — who Trump called "Hopester" or "Hopie" — became known as a "Trump whisperer," who could interpret the president's moods and judge the best time to approach him. In her duties she also arranged, and sometimes sat in on, press interviews.

Hicks worked for Trump before getting tapped for the political campaign. While at the PR firm Hiltzik Strategies, Hicks met client Ivanka Trump (Hicks helped promote the Ivanka Trump Collection and even modeled for the line). The two became friends, and Ivanka's father was also impressed by Hicks. In 2014, Hicks joined the Trump Organization.

While working at the White House, Hicks received a salary of $179,700, putting her at the highest pay level for any White House staffer. She earned this in her roles as director of strategic communications and as communications director.

Hicks has been called to answer questions regarding possible Russian interference into the 2016 election, and any obstruction of this inquiry. In September 2017, it was revealed that Hicks had hired attorney Robert P. Trout to represent her. She was interviewed by the office of special counsel Robert Mueller in December 2017.

In her interviews, Hicks may have been asked about the June 2016 Trump Tower meeting between Donald Trump Jr., the president's son; Jared Kushner, the president's son-in-law; then-campaign manager Paul Manafort; a Russian lawyer and others. In July 2017, Hicks was reportedly involved in preparing a misleading statement that said this meeting had been to discuss the adoption of Russian children (her lawyer has denied she helped craft this statement).

However, emails later revealed that Trump Jr. had actually set up the meeting because he wanted to obtain incriminating information about Hillary Clinton, the Democratic presidential candidate. Mark Corallo, who worked as a spokesman for Trump's legal team, has also alleged that Hicks once stated Trump Jr.'s emails "will never get out." (Hicks' attorney has denied that his client ever contemplated hiding or destroying documents.)

Hicks also reportedly knew about Trump and adviser Stephen Miller working on a letter to explain the firing of FBI director James Comey (another letter, penned by Deputy Attorney General Rod Rosenstein, was shared publicly). In addition to meeting with the special counsel's team and testifying before the House Intelligence Committee, Hicks has been interviewed by the Senate Intelligence Committee.

When Was Hope Hicks Born?

Hope Hicks was born on October 21, 1988, in Greenwich, Connecticut.

Hicks' parents, Paul B. Hicks III and Caye Ann Cavender, met in 1981 while working in Washington, D.C. They raised Hicks and her sister, Mary Grace, in the well-to-do town of Greenwich.

While working in PR, Hicks shared an apartment in Greenwich with her sister and commuted to New York City. However, during the presidential campaign she began staying in a Trump-owned apartment, which was provided free of charge.

When Hicks was young, she worked as a model, appearing in ads for companies like Ralph Lauren and Naturalizer shoes. She also was the cover model for a book from The It Girl series, a spinoff of the popular Gossip Girl line of books.

Hicks once made a cameo appearance on the soap opera Guiding Light. When she was 13, she told Greenwich magazine, "If the acting thing doesn’t work out, I could really see myself in politics. Who knows?"

Though Hicks has left modeling behind, her fashion choice of a tuxedo for a Japanese state dinner in 2017 drew public attention.

Hicks graduated from Greenwich High School in 2006. While attending Southern Methodist University, she was a sorority member of Pi Beta Phi and was on the lacrosse team. Hicks graduated college in 2010 with a degree in English.

In 2011, Hicks went to the Super Bowl with her father. There she either encountered the actor Alec Baldwin, who was a client of public relations guru Matthew Hiltzik, or she met Hiltzik himself. What is certain is that Hicks soon started working for Hiltzik Strategies in New York City.

Hicks was not the first person in her family to go into public relations. Her grandfather oversaw PR for Texaco, including during the 1970s oil crisis. Her father was a regional CEO for Ogilvy Public Relations and directed PR for the National Football League. He is now managing director for a PR firm, Glover Park Group, that has a focus on crisis management.

Hicks spent so much time on the 2016 presidential campaign that she broke up with her boyfriend of six years. In addition to her relationship with Rob Porter (which friends told the Daily Mail has now ended), Michael Wolff's book Fire and Fury related that Hicks was romantically involved with Corey Lewandowski during the campaign.

Though Hicks' next steps are unknown, she could return to the world of public relations. And a book about her experiences in the White House would almost certainly interest publishers.