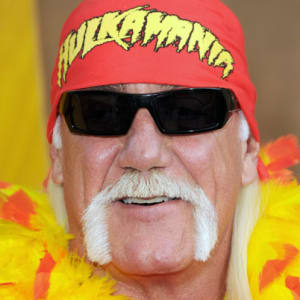 Hulk Hogan was one of the most beloved figures in the World Wrestling Federation in the 1980s, known for his flamboyance and the frenzy of his fans, which was referred to as ‘Hulkamania.’

Who Is Hulk Hogan?

Born Terry Gene Bollea, on August 11, 1953, in Augusta, Georgia, Hulk Hogan was discovered in 1979 by World Wrestling Federation owner Vince McMahon Sr. and had his debut match against Andre the Giant, which he won. Hulkamania, his popularity among fans, spread from there. Reinventing himself as Hollywood Hogan in 1996, he made a comeback and starred in his own TV show with his family, Hogan Knows Best, from 2005 to 2009.

Born Terry Gene Bollea, on August 11, 1953, in Augusta, Georgia, Bollea is the youngest son of Pete Bollea, a construction foreman, and Ruth Bollea, a homemaker and dance instructor.

Bollea acquired an interest in wrestling in high school. He went on to study at Hillsborough Community College and the University of South Florida. While he pursued his education, his interests remained in the ring and he never received his degree. Instead, he chose to devote his time to working out in a local gym owned by wrestlers Jack and Jerry Brisco. Encouraged by these two brothers, Bollea spent a few months wrestling on small circuits in the Southeast.

In 1979, Bollea's talent caught the attention of Vincent McMahon, the legendary promoter and owner of the World Wrestling Federation (WWF), the most prominent wrestling league in the Northeast. McMahon gave Bollea an opportunity to join the WWF—and to create a new identity. Because of his massive physique (he stood 6 feet 8 inches, and weighed 303 pounds) and his uncanny resemblance to the comic book hero, the Incredible Hulk, McMahon suggested that Terry assume the stage name "Hulk Hogan."

In 1980, Hogan had his debut bout against the even bigger Andre the Giant. Hogan won the match, along with the respect and support of wrestling fans throughout the country. Hogan also caught the attention of actor Sylvester Stallone, who cast him as "Thunderlips the Ultimate Male" in his 1982 movie, Rocky III.

In 1984, Hogan was awarded the WWF championship belt for his memorable defeat of the Iron Sheik. He quickly rose to super-stardom, and the resulting fan frenzy, nicknamed Hulkamania, became legendary. Hogan's success during this time bolstered the public's fascination with professional wrestling. In total, he would become a 12-time world champion; six times with the WWF/E and another six with the WCW (World Championship Wrestling).

By 1985, Hogan had acquired tremendous popularity among Americans. His image was marketed to sell a multitude of products, and he began to take on leading roles in a number of films. In 1989, Hogan starred in the wrestling movie No Holds Barred. This film was moderately successful, but was followed by several low performing movie projects, including Mr. Nanny (1993) and Santa with Muscles (1996).

The success Hogan enjoyed in the 1980s waned in the early 90s. Accused of providing anabolic steroids to its wrestlers, the WWF underwent a turbulent trial in which Hogan was called to testify against his former boss, McMahon. Hogan's admission of drug abuse forced him to terminate both his wrestling and film careers.

Hogan surprised everyone by making a remarkable comeback to the wrestling arena in 1996. Re-inventing himself as "Hollywood Hogan," the wrestler established himself as a villain and, once again, secured his popularity among wrestling fans. Hogan joined media tycoon Ted Turner's WCW (World Championship Wrestling) as part of the New World Order, a wrestling team that paired Hogan with two other wrestlers, Kevin Nash and Scott Hall. This infamous triumvirate gained immense support from wrestling fans and, ultimately, returned Hogan to the success of his past.

In 2002, he shared his experiences as a professional wrestler in his autobiography, Hollywood Hulk Hogan. He also gave television viewers an inside look into his family life in the reality series Hogan Knows Best, which first aired in the summer of 2005. The show followed the daily lives of Hogan and his wife Linda as they raised their teenage children, daughter Brooke and son Nick.

Early on, the show earned some comparisons to veteran rocker Ozzy Osbourne's hit reality show, The Osbournes. In response, Hogan called his family "the anti-Osbournes." That same year, Hogan was inducted into the World Wrestling Entertainment Hall of Fame. His friend Sylvester Stallone presented him with the honor.

For four seasons, Hogan had a popular television show. Viewers tuned in to see the famous wrestler face a variety of personal and parental challenges, including getting marriage counseling with his wife and responding to his daughter go on dates. The greatest hardship, however, happened off-camera. During August of 2007, Hogan's son, Nick, was involved in a car crash which left his friend John Graziano critically injured. Law enforcement officials arrested Nick three months later for his role in the accident. In May of 2008, Nick pled no contest to a felony count of reckless driving, and received an eight-month prison sentence. Around this time, Hogan's wife Linda filed for divorce, seeking to end their 24-year marriage. Hogan initially told the press he hoped to reconcile, but his wife later dismissed the notion.

Despite his personal difficulties, Hogan continued to thrive professionally. In January of 2008, he was tapped to co-host the reality competition American Gladiators with Laila Ali, a professional boxer. The show aired for two seasons.

In July 2008, Hogan and his daughter, Brooke, starred together in a short-lived reality series, Brooke Knows Best. That fall, Hogan became the host and executive producer of Hulk Hogan's Celebrity Championship Wrestling. The show, aired on the Country Music Television cable network, pits celebrities against each other in competition to see who is the best celebrity wrestler. Competitors included Danny Bonaduce, Todd Bridges, and Dennis Rodman.

In April 2012 a sex tape of Hogan and Heather Clem, the then-wife of radio personality Bubba the Love Sponge, was leaked online. Both Hogan and Heather claimed they were unaware that they were being filmed. That fall Hogan sued the couple for invasion of privacy and a settlement shortly followed.

But Hogan's problems turned for the worse when Gawker published a short clip of the sex tape in October 2012. Repercussions of the scandal continued when it was soon discovered that included in the sex tape were anti-black rants by the wrestler. Despite admitting being "racist, to a point," Hogan quickly admitted he was wrong and that his racial slurs were regrettable. In July 2015 the WWE terminated its contract with Hogan.

Radar Online added to his problems when it reported he also made homophobic slurs on the sex tape and discovered he made racist comments during a recorded phone call to his imprisoned son in 2008.

As a result of these scandals, various sponsors pulled out of doing business with Hogan and selling the celebrity's merchandise. Hogan, who used his legal name Terry Bollea in court, sued Gawker for defamation, loss of privacy, and emotional pain and was awarded $140 million in damages by a Florida jury in March 2016. Peter Thiel, the Silicon Valley billionaire who co-founded PayPal, helped to fund the invasion of privacy lawsuit as well as other cases brought against the media company. Thiel's homosexuality was the subject of a 2007 article published by Gawker. “It’s less about revenge and more about specific deterrence,” Thiel said in an interview With the New York Times. “I saw Gawker pioneer a unique and incredibly damaging way of getting attention by bullying people even when there was no connection with the public interest.”

The financial hit Gawker took as a result of the verdict contributed to the company filing bankruptcy in June, and the company was sold through an auction to Univision for $135 million in August 2016. In November 2016, Gawker reached a $31 million cash settlement with Hogan, which also called for him to receive proceeds from a possible future sale of Gawker.com.

Hogan currently resides in Clearwater, Florida. In 2010 he married Jennifer McDaniel, whom he had been dating since 2008.