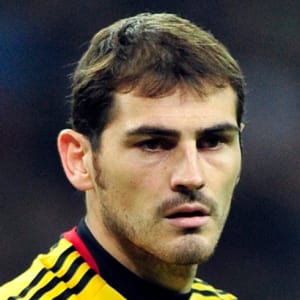 Iker Casillas became a top goalkeeper for Real Madrid and the Spanish teams that won the 2010 FIFA World Cup and the 2008 and 2012 European Championships.

Born on May 20, 1981, in Móstoles, Spain, Iker Casillas joined the Real Madrid youth system at age 9. He became the youngest goalkeeper to start in a Champions League final match in 2000, and sparked Real Madrid to multiple domestic titles in subsequent years. Casillas also starred for the Spanish teams that won the 2010 FIFA World Cup and the 2008 and 2012 European Championships.

Iker Casillas Fernández was born on May 20, 1981, in Móstoles, Spain. Casillas grew up playing soccer with his dad and neighborhood friends, but wasn't involved in an organized league until he joined the Real Madrid youth system at age 9.

The agile Casillas emerged as a star goalkeeper as a teenager, anchoring the defense for the Spanish junior national teams that won the 1997 UEFA European Under-16 Championship and the 1999 FIFA World Youth Championship.

Casillas broke through to Real Madrid's senior side in 1999. He became the youngest starting goalkeeper in a UEFA Champions League final in May 2000, and made his debut for Spain's senior national team shortly afterward.

In his first four seasons, Casillas helped Real Madrid win two league titles, two Spanish Super Cups and a UEFA Super Cup. He was benched during the 2001-02 campaign after a period of erratic play, but responded with several amazing saves late in the 2002 UEFA Champions League final vs. Bayer Leverkusen to preserve the win.

Casillas became Spain's starting goalkeeper during the 2002 FIFA World Cup, earning acclaim for his performance to help his side reach the quarterfinals.

Named Spanish team captain after the 2006 FIFA World Cup, Casillas enjoyed an impressive stretch of individual and team success. He helped Real Madrid win back-to-back league titles in 2007 and 2008, as well as the '08 Spanish Supercup. Cementing his reputation as the game's best goalkeeper, he was named to the UEFA Team of the Year for the first of six straight years in 2007, and finished fourth in the Ballon d'Or voting in 2008.

Casillas also helped Spain end its lengthy drought of international success with his airtight defense in the 2008 European Championship. Spain went on to win the 2010 FIFA World Cup and 2012 European Championship, with Casillas earning selection to the All-Star teams of all three tournaments.

Casillas claimed another league title and Supercup victory with Real Madrid in 2012, but the combination of a fractured finger and rift with manager José Mourinho resulted in diminished playing time the following season, clouding the future of the once-peerless goalkeeper.