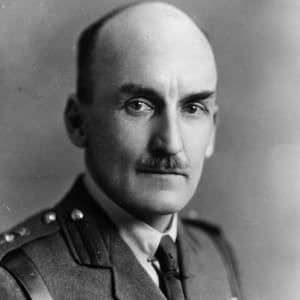 Born on September 1, 1878, in Chichester, England, J.F.C. Fuller became a high-ranking military officer who propagated tank warfare in British offensives. Upon retiring from the military, he became a war correspondent and wrote books on military history. Espousing anti-Semitic beliefs, Fuller was a member of Sir Oswald Mosley's British Union of Fascists. He died on February 10, 1966.

John Frederick Charles Fuller was born on September 1, 1878, in Chichester, England, to Selma and Alfred Fuller. The would-be soldier attended Malvern and the Royal Military College before joining his country's infantry in the late 1890s.

He was stationed in England's south east region before serving in the Second Boer War in South Africa. Fuller was later placed in India and moved up the military ranks. He also wed Margaretha "Sonia" Karnatz in 1905.

Fuller developed an Interest in the occult and spiritual/mystical belief systems, and grew to support Aleister Crowley, a writer/poet with the nickname "The Great Beast" who'd founded a sect with the hope of creating a new religion. Fuller and Crowley later fell out by the early 1910s, though Fuller would still applaud Crowley's work.

Fuller was developing his own skills as a writer as well, preparing military training manuals while earning a reputation as a difficult personality. During World War I, Fuller was part of the British Heavy Branch Marine Corps and came up with the idea of relying on tank-based maneuvers in place of trench warfare. The Western Front's Battle of Cambrai in November and December of 1917 was the first time that tanks were used in a large, offensive attack, becoming an influential marker for future methods of combat.

Post World War I, Fuller became top instructor at Camberley Staff College and continued to push for technology-based modes of warfare, with his teachings studied closely by the military of other countries.

Though eventually becoming major general, Fuller retired in 1933 after continuing to rile ranks. He served as a war correspondent in Ethiopia and Spain and in the mid-1930s had joined the British Union of Fascists, headed by Sir Oswald Mosley. He went on to meet figures like Benito Mussolini and Adolf Hitler, and became known for his anti-Semitic views.

After the war, Fuller continued his writing activities as a journalist and author. He published dozens of books during his lifetime, with an emphasis on military history and strategies in sometimes vitriolic language. His works include The Dragon's Teeth: A Study of War and Peace (1932) and the three volume A Military History of the Western World (1954-56), as well as biographical volumes on Ulysses S. Grant, Julius Caesar and Alexander the Great.