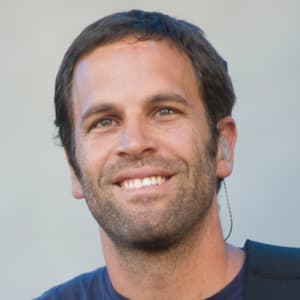 Born in Hawaii in 1975, Jack Johnson began playing guitar as a teenager. Shortly after graduating from UC Santa Barbara, Johnson recorded several songs for a low-budget surfer movie that became a cult hit. The soundtrack's success eventually led to a record contract and the 2001 release of Johnson's debut album, Brushfire Fairytales. Several records and millions of album sales have since followed.

The youngest of three boys, Jack Johnson was born on May 18, 1975, in Oahu, Hawaii. The son of legendary surfer Jeff Johnson, young Jack took to the water like his father as well as older brothers, and was a regular on the surfboard by the age of 5.

The Johnsons lived a life built around being outdoors. Summers became dominated by canoe trips and family camping adventures. And when he wasn't traveling with his parents and brothers, Jack was often at the ocean, surfing as much as he could, something that continues today.

"Growing up I would try to surf three, four hours a day," Johnson said in a 2008 interview. "I've become dependent on it. It's hard when you start an addiction at age 5."

By his teens, Johnson had also developed a love for music. His brother Trent had a band, and Jack liked to sneak into his room to play around with the reverb on the guitar amp. His musical tastes varied, from Black Sabbath to the Doors to the Violent Femmes. Alone in his bedroom, Johnson taught himself guitar by figuring out the chord structures to Van Morrison and Bob Marley songs.

In 1992, Johnson made history when the 17-year-old became the youngest surfer to reach the finals of the Pipeline Masters in Oahu. It essentially served as the peak of his competitive surfing career. Shortly after falling short of winning the competition, Johnson suffered a gruesome surfing accident when he careened into a coral reef and severely cut up his face.

"It was a personality changer," says Johnson, who quit competitive surfing not long after. "It humbled me, and it slowed me down. I like to joke that I hit my head so hard that that's why I'm so mellow, but I think it did mellow me out—in a positive way."

After graduating from high school, Johnson enrolled at the University of California at Santa Barbara, where met his future wife, Kim, and took to writing his own music in the hopes that he could impress her. Married in 2000, they have two sons and a daughter together.

Not long after graduating from UC Santa Barbara, Johnson wrote a couple of songs for a low-budget surfer movie called Thicker Than Water. The film became a cult hit, and Johnson's music, steeped in his now-adored calm, mellow style, helped drive interest in it. As cassettes of the soundtrack were passed around, a copy landed in the hands of musician Ben Harper, a fellow surfer, who was so impressed he invited Johnson to perform on his 2001 tour.

It wasn't long before Johnson was inundated with offers from major music labels. He eventually signed with Universal, and in 2001 Johnson released his first album, Brushfire Fairytales, which went platinum. Similar success followed with 2002's On and On.

His 2005 album, In Between Dreams, peaked at No. 2 on the charts and went on to sell more than 2 million records. A year later, Johnson achieved even more success with the Curious George film soundtrack, Sing-A-Longs and Lullabies, which debuted at No. 1 and sold more than 149,000 copies in its first week. By 2008, Johnson, whose hits include "Sitting, Waiting, Wishing," "Upside Down," "If I Had Eyes" and "Better Together," among others, had sold more than 15 million album copies.

In all, Johnson has released six solo albums, the last five of which have all been recorded at his Mango Tree Studio in Hawaii.

In addition to his music, Johnson is a committed supporter of environmental causes. For several years he and his wife Kim organized the Kokua Festival, a fund-raising Earth Day concert that featured a number of headline performers, from Willie Nelson to Eddie Vedder.

Johnson lives with his family in Oahu.