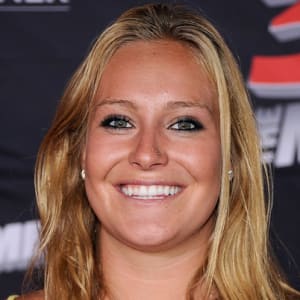 Who Is Jamie Anderson?

Born on September 13, 1990, in South Lake Tahoe, California, Jamie Anderson learned to snowboard as a 9-year-old. She competed in her first Winter X Games at 13, and at 16 she became its youngest female winner. Anderson claimed a gold medal in her signature slopestyle event at the 2014 Sochi Games, and with her follow-up victory at the 2018 PyeongChang Games, she became the first female snowboarder to twice win Olympic gold.

Jamie Louise Anderson was born on September 13, 1990, in South Lake Tahoe, California. One of eight children, she grew to love the outdoor activities that were part of a mountain-town lifestyle.

Anderson was home-schooled along with her five sisters, the eldest two proving strong influences in her life. They introduced her to snowboarding at the age of 9, and all three became part of the snowboard team at the local Sierra-at-Tahoe resort.

Jamie Anderson began taking part in regional competitions, working her way up to national and junior world championship events. At age 13, she qualified for her first Winter X Games in the boardercross, a racing event, but soon became better known for her mesmerizing tricks in the slopestyle.

At 15, Anderson won the Winter X Games slopestyle bronze medal to supplant Shaun White as the youngest medalist in the history of the popular winter showcase. She topped that effort the following year by becoming the youngest woman to win a Winter X Games gold medal.

Anderson notched her fourth slopestyle gold and seventh overall medal at the Winter X Games in 2013.

With slopestyle named an Olympic event for the first time at the 2014 Winter Games in Sochi, Russia, Anderson quickly became one of the favorites in her signature event. She lived up to the expectations, sticking a pair of 720s in her second run of the women's final to notch a gold medal-winning score of 95.25.

Capitalizing on her success, Anderson in April 2018 joined the cast of Dancing with the Stars: Athletes, giving her the chance to show off her moves against fellow U.S. Olympians like skaters Adam Rippon and Mirai Nagasu.

Anderson has created an environmentally conscious clothing company named TRYE (To Respect Your Earth). She has also collaborated with her old middle school to develop a sponsorship program for gifted children who have an interest in snowboarding but lack the funds.

Along with hiking, paddleboarding and camping, Anderson names yoga as one of her favorite non-snowboarding activities.