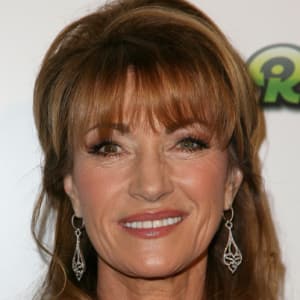 Who Is Jane Seymour?

Actress Jane Seymour was born on February 15, 1951, in Hayes, Hillingdon, England. At age 20, she was cast in the James Bond film Live and Let Die. The performance earned her continual TV and film work. Her performance in the 1976 miniseries Captains and the Kings earned her an Emmy nomination. From 1993 to 1998, Seymour held the title role on the TV series Dr. Quinn: Medicine Woman, for which she garnered two more Emmy nominations. She won her first Emmy (outstanding supporting actress in a miniseries or a special) in 1998 for her performance in the TV movie Onassis: The Richest Man in the World. In 2002, Seymour debuted her own clothing line.

Seymour, the eldest of three daughters, was raised on the outskirts of London. Her father, John Frankenberg, was a Polish obstetrician and her mother, Mieke, a former Red Cross nurse. Her first love was ballet and she trained rigorously toward a career in that field. She made her professional debut at the age of 13 with the London Festival Ballet. She then entered the Arts Educational Trust to receive additional instruction. Three years later, after a performance with the Kirov Ballet, Seymour suffered knee injuries that effectively ended her dancing career.

She turned to the theater, renaming herself after King Henry VIII's third wife, the only survivor of her husband's penchant for beheading his brides. At the age of 20, she was cast in the James Bond film Live and Let Die as Solitaire, the prototypical 007 ingénue. The performance earned her continual TV and film work, much of it mainstream fare, including appearances on episodic programs such as McCloud and Battlestar Galactica.

Seymour's performance in the 1976 miniseries Captains and the Kings earned her an Emmy nomination and established her reputation as "Queen of the Miniseries." More than a decade later, she won an Emmy Award (outstanding supporting actress in a miniseries or special) for her performance as Maria Callas in the TV movie Onassis: The Richest Man in the World, a biopic of Aristotle Onassis that aired on ABC.

In 1984, Seymour played the role of Lady Brett Ashley in the television adaptation of Ernest Hemingway's The Sun Also Rises on NBC.

When it premiered in 1993, Dr. Quinn: Medicine Woman. was largely dismissed by critics as too hokey for American viewers. However, the show attracted 22 million viewers at its peak, and led its Saturday-night time slot. Dr. Quinn ran for six seasons and garnered Seymour two Emmy nominations. Following the show's cancelation, the actress reprised her role in several made-for-TV movies.

Seymour teamed up with current husband James Keach for several projects, including a production company called Catfish Productions. The two have also authored a series of children's books. In the spring of 2002, Seymour debuted her own clothing line, the Jane Seymour Signature Collection. Later that year, Seymour signed a deal to develop and sell an exclusive home products and children's clothing line to Saks Fifth Avenue.

Seymour has continued to appear in both TV and film roles. She had a recurring role on Smallville from 2004 to 2005. The following year, Seymour starred in the short-lived comedy Modern Men. She proved to be quite a scene stealer with her small part in the hit comedy Wedding Crashers starring Owen Wilson and Vince Vaughn in 2005.

In the fall of 2007, Seymour tackled a new challenge. She competed on the fifth season of Dancing With the Stars, making to the show's seventh round. Since then, Seymour has made a number of guest appearances on such series as Castle and Franklin & Bash. She has also continued to appear in made-for-TV movies, with recent credits including 2012's Lake Effects.

Seymour devotes much of her time these days to her art. She makes appearances at galleries around the country. In addition to fine art, Seymour markets a line of jewelry called Open Hearts, a skin care program as well as furniture and home accessories. She also created the Open Hearts Foundation, which supports arts, education, health and sports charities.

In February 2018, the ageless beauty posted a photo from a recent shoot for Playboy on Instagram. "I feel much sexier now than I ever did when I was younger," she told the publication. "There’s an enormous freedom in having lived as long as I have. Like my father used to say, I’m comfortable in my own skin."

Seymour married Michael Attenborough, son of famed British director Sir Richard Attenborough, when she was 20. The marriage was short lived, and in 1977, Seymour married again, this time to businessman Geoffrey Planer. After a year, the couple divorced. In 1981, Seymour wed her then-business manager, David Flynn. The marriage produced two children, Katie and Sean, but the couple divorced in 1992.

Seymour met actor-director Keach, in 1992. The two wed in May of 1993. Seymour gave birth to twins in 1996, bringing the family total to six (including stepson Kalen Keach and stepdaughter Jenny Flynn). The family owns residences in Malibu, California and Bath, England.