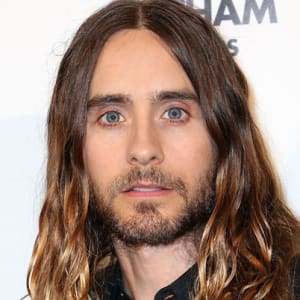 Jared Leto is an actor known for roles in the films Requiem for a Dream and Dallas Buyers Club. He is also co-founder and lead singer of the rock band 30 Seconds to Mars.

Born on December 26, 1971, in Bossier City, Louisiana, Jared Leto began acting in college. His breakthrough role was on the show My So-Called Life (1994-95), starring Claire Danes. A film career followed, including roles in Fight Club (1999), Requiem for a Dream (2000) and Dallas Buyers Club (2013), for which he received the 2014 Academy Award for best supporting actor. Leto is also the lead singer of the popular band 30 Seconds to Mars, which he founded with brother Shannon.

Jared Leto was born on December 26, 1971, in Bossier City, Louisiana. Leto's parents divorced shortly after he was born and his mother, a traveling artist, raised him. The family struggled financially, but creativity was emphasized and Jared and his older brother, Shannon, both developed a robust appreciation of the arts. Leto enrolled at Philadelphia's University of the Arts to study painting, but switched his focus to acting and transferred to the School of Visual Arts in New York City, where he majored in filmmaking.

In 1992, Leto moved to Los Angeles, California. His breakthrough acting role came when he was cast as Claire Danes's love interest, Jordan Catalano, in My So-Called Life (1994-95). Fans of the show were so rabid that Leto received a human ear and a box of pubic hair. Solidifying his heartthrob status, the actor was named on People magazine's "50 Most Beautiful People" list in both 1996 and 1997.

Leto appeared in his first film role in 1995, in How to Make An American Quilt. He later landed roles in The Thin Red Line (1998), directed by Terrence Malick, and Fight Club (1999), directed by David Fincher and starring Brad Pitt, Edward Norton and Helena Bonham Carter. In 2000, Leto starred in Mary Harron's American Psycho alongside Christian Bale, as well as Darren Aronofsky's Requiem for a Dream alongside Ellen Burstyn, Marlon Wayans and Jennifer Connelly. To prepare for his role as heroin addict Harry Goldfarb in the Requiem, Leto reportedly lived on New York City's streets and abstained from sex with then-fiancé Cameron Diaz (the couple broke up in 2003). The actor showed similar dedication in his role as John Lennon's assassin in Chapter 27 (2007), gaining 60 pounds for the part.

Jared and Shannon Leto founded the band 30 Seconds to Mars (also stylized as Thirty Seconds to Mars) in 1998. Jared serves as the group's lead singer, Shannon plays drums and multi-instrumentalist Tomo Milicevic rounds out the trio. In May 2013, the band released their fourth album, Love, Lust, Faith and Dreams. Later that year, the group won the MTV Video Music Award for best rock video for the song "Up in the Air."

Leto directs 30 Seconds to Mars' music videos under the pseudonym "Bartholomew Cubbins," a Dr. Seuss character. In 2012, the group released a documentary, Artifact, about their feud and $30 million lawsuit with record label EMI.

The band has a loyal following, especially in Europe. Leto calls 30 Seconds to Mars' supporters "the echelon" instead of "fans." By 2013, the group had sold more than 10 million copies of their four albums. Additionally, they set a Guinness World Record for longest concert tour by a rock band—300—in 2011.

In 2014, Leto won the Academy Award for best supporting actor for his role as a transgendered woman named Rayon in the film Dallas Buyers Club (2013). Leto lost 30 pounds for the role, which marked his return to acting after a six-year hiatus. After another hiatus, Leto is back on the big screen as the villainous Joker in the 2016 action-packed superhero release of Suicide Squad.