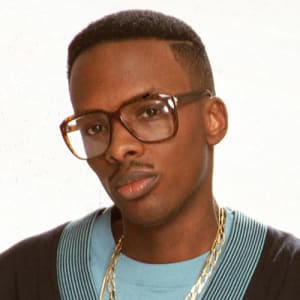 Jazzy Jeff is a DJ and producer known for his pioneering turntable work and his collaboration with Will Smith, DJ Jazzy Jeff and the Fresh Prince.

Born in Philadelphia, Pennsylvania, on January 22, 1965, Jazzy Jeff took to the DJ booth at age 10. He worked in area clubs, pioneering the transformer scratch and chirp scratch. In 1985, he and Will Smith formed the act DJ Jazzy Jeff and the Fresh Prince. They sold millions of records and became the first rap act to win a Grammy. In 1990, Jazzy Jeff founded A Touch of Jazz, a music production company.

Born Jeffrey Allan Townes on January 22, 1965, Jazzy Jeff's DJ work started in his family's southwest Philadelphia basement when he was just 10 years old. It wasn't long before he was playing local clubs, where he became known as the "bathroom DJ"—not in a position to book his own gigs, he took to the turntable only when the house DJ was on a bathroom break. But it was in this setting that he began to hone his skills, along the way becoming one of the pioneers of the "transformer" scratch (which uses a fader to cut the sounds in and out quickly) and the "chirp" scratch (which makes the turntable make birdlike sounds), which can be heard on the 1998 Will Smith song "Gettin' Jiggy Wit It."

The turning point for Jazzy Jeff's career came in 1985, when he met Will Smith at a party. The two began working together, immediately clicking creatively. The next year, Jazzy Jeff won the DJ competition at the 1986 New Music Seminar, and he and Smith secured a record deal with the Word Up label. Featuring humor and fresh beats, DJ Jazzy Jeff and the Fresh Prince released Rock the House in 1987 (after it was previously issued on another label). The album was a huge hit, reaching gold status (selling over 500,000 copies) in 1988. The first single, "Girls Ain't Nothing but Trouble," released just before Smith graduated from high school, climbed the charts and became the duo's first single to sell more than a million copies.

For their follow-up to Rock the House, DJ Jazzy Jeff and the Fresh Prince moved to Jive Records, releasing He's the DJ, I'm the Rapper in 1988. The album sold over 2.5 million copies, and its first single, "Parents Just Don't Understand," became a huge hit with their teen audience and made it to No. 12 on the charts. The song also led the duo to their first Grammy, marking the first time a rap act won the prestigious award, and their growing popularity led to a nationwide tour with Run-DMC.

The first was 1991's Homebase, which went on to platinum status and earned the duo's second Grammy Award, for the smash single "Summertime," which reached No. 4 on the Billboard Hot 100 chart. The last studio album the pair would release was 1993's Code Red, which went on to achieve gold status. But at this point, Will Smith had three Hollywood films under his belt and was essentially turning his career toward the big screen for good (they would reunite and perform a few songs at 2005's Live 8 concert in Philadelphia).

After DJ Jazzy Jeff and the Fresh Prince dissolved, Jazzy Jeff started a musical production company, A Touch of Jazz, and produced pop and rap recordings as well as music for television and film. He also designed the first mixer made specifically for DJs who scratch records, the Gemini 2200. The 21st century finds Jazzy Jeff still producing and working with up-and-coming talent through a partnership with Dreamworks.