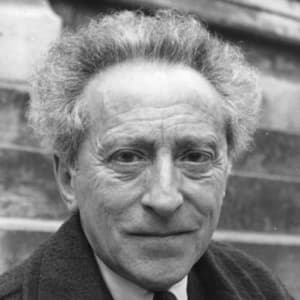 Writer, artist and film director Jean Cocteau was one of the most influential creative figures in the Parisian avant-garde between the two World Wars.

Jean Cocteau was born on July 5, 1889, in Maisons-Laffitte, France. He spent most of his life in Paris, where he became part of the artistic avant-garde and was known for his variety of accomplishments. Over a 50-year career, he wrote poetry, novels and plays; created illustrations, paintings and other art objects; and directed influential films, including The Beauty and the Beast and Orpheus. He died on October 11, 1963.

Jean Cocteau was born on July 5, 1889, in Maisons-Laffitte, France, a village 12 miles outside Paris, to Georges and Eugénie (née) Lecomte Cocteau. He and his two older siblings were brought up in comfortable household in Paris, where they were introduced to the arts by their parents. Their father, a lawyer and amateur artist, committed suicide in 1898.

After his father's death, Cocteau was raised by his mother and his maternal grandfather. He attended school at the Lycée de Condorcet in Paris and he showed an early talent for writing. When he was just 18, his poetry was read aloud in performance arranged by the well-known actor Edouard de Max, and he became the toast of literary Paris. His first book of poems, La Lampe d'Aladin (Aladdin's Lamp), was published a year later, in 1909.

Cocteau and the Parisian Avant-Garde

In the 1910s, Cocteau formed friendships with many prominent members of the Parisian avant-garde, including writer Guillaume Apollinaire and artists Amedeo Modigliani and Pablo Picasso. He was so impressed by seeing the dancer Vaslav Nijinsky perform with the Ballets Russes that he met the company's founder, Sergei Diaghilev, and asked to work with him. Cocteau designed posters for the Ballets Russe, and in 1917 he was one of the collaborators on the ballet Parade: Cocteau wrote the story, Erik Satie composed the music, Léonide Massine choreographed the dance and Picasso designed the set and costumes.

Cocteau's activities of the 1920s were remarkably varied. He composed opera libretti for several composers. He published collections of poetry and illustrations as well as a novel inspired by his experiences during World War I. He staged a ballet called Le Boeuf Sur le Toit (The Ox on the Roof) and directed modern adaptations of several classic dramas. He promoted the work of young writer Raymond Radiguet, with whom he fell in love. When Radiguet died of typhoid fever, Cocteau was despondent and tried to console himself by taking opium.

In 1930, Cocteau wrote and directed his first motion picture, the silent, surrealistic film Le Sang d'un Poète (The Blood of a Poet). Like many of his signature works, it portrayed a creative artist's encounters with love and death.

After a 16-year interval, Cocteau made his most famous film, La Belle et la Bête (The Beauty and the Beast), a retelling of a classic fairy tale. This motion picture, starring Josette Day and Jean Marais, would inspire many other filmmakers with its dreamlike atmosphere and surrealistic special effects. Cocteau went on to write and direct several other films in the 1940s.

Cocteau returned to the subject of the solitary artist-poet in his film Orphée, a surreal adaptation of the ancient Greek myth of Orpheus starring Jean Marais. He completed his "Orpheus trilogy" in 1960 with Le Testament d'Orphée (The Testament of Orpheus), in which he played a poet much like himself.

In his late years, Cocteau was also famous just for being Cocteau: He had rightfully gained a reputation as one of the most versatile and influential creative minds of his era. In 1955, he was inducted into the Academie Française.