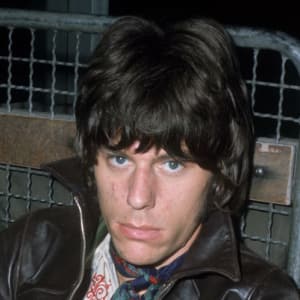 Jeff Beck is a guitarist best known for his recordings and performances with The Yardbirds, The Jeff Beck Group, and as a solo artist.

Jeff Beck was born in Wallington, England, on June 24, 1944. Beck rose to prominence as the guitarist for the British Invasion band The Yardbirds. He went on to record with two incarnations of The Jeff Beck Group, and achieved commercial success as an instrumental solo artist. Beck is known for his virtuosity as a guitarist, and for his inventive jazz- and blues-inflected compositions.

Geoffrey Arnold Beck, better known as Jeff Beck, was born on June 24, 1944, in Wallington, England. He was raised by parents Arnold and Ethel Beck. As a teenager, Beck learned to play the guitar and made several attempts to build his own instrument. This drive to innovate and modify instruments would become characteristic of Beck in his career as a guitarist.

Beck, who gravitated toward music and art, attended the Wimbledon College of Art. His sister introduced him to Jimmy Page, who would go on to play with The Yardbirds and found the band Led Zeppelin.

Beck began his musical career with The Rumbles, performing Gene Vincent and Buddy Holly covers. In March 1965, Beck was recruited by The Yardbirds to replace Eric Clapton, on the recommendation of Jimmy Page. The Yardbirds recorded most of their hit songs during Beck's short tenure with the band, playing on the 1966 album Roger the Engineer (known in some markets, including the United States, as "Over Under Sideways Down.") Despite Beck's obvious skill as a guitarist, The Yardbirds found him to be a difficult addition to the band. After frequent outbursts and absences during a U.S. tour, Beck was fired.

After his ejection from The Yardbirds, Beck formed The Jeff Beck Group, featuring Rod Stewart on vocals and Ron Wood on bass. The group produced two albums. Truth, released in 1968, five months before the first Led Zeppelin album, features the Willie Dixon song "You Shook Me," later featured on a Zeppelin album. Rod Stewart left the band after Beck canceled their Woodstock appearance at the last minute. Stewart went on to enjoy a successful solo career.

Beck continued to try to form a solid band over the next few years. His progress was slowed by a serious car accident in 1969. By April 1971, Beck had completed the line-up of his new band, Jeff Beck Group, which shared a name with his previous group but had a substantially different sound. The new band released two albums in the early 1970s, Rough and Ready and Jeff Beck Group.

Beck recorded his most commercially successful albums in the mid-1970s. The first of these was Blow by Blow, released in 1975, which showcased Beck's technical skill and ability to write and play jazz-rock. His follow-up record, Wired, was released in 1976. These two albums, both produced by Beatles producer George Martin, were Beck's first to go platinum. Around this time, Beck turned almost exclusively to instrumental music, including vocals only intermittently.

Today, Beck continues to tour and release albums, appearing as a guest on tracks by Cyndi Lauper, Macy Gray and Luciano Pavoratti.

Beck has won multiple Grammy Awards, and has influenced musicians from Slash to Joe Perry. The Yardbirds were inducted into the Rock and Roll Hall of Fame in 1992. Beck was inducted as a solo artist in 2009.