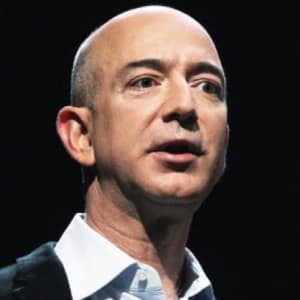 American entrepreneur Jeff Bezos is the founder and chief executive officer of Amazon.com and owner of ‘The Washington Post.’ His successful business ventures have made him one of the richest people in the world.

Who Is Jeff Bezos?

Entrepreneur and e-commerce pioneer Jeff Bezos was born on January 12, 1964, in Albuquerque, New Mexico. Bezos had an early love of computers and studied computer science and electrical engineering at Princeton University. After graduation he worked on Wall Street, and in 1990 he became the youngest senior vice president at the investment firm D.E. Shaw. Four years later, he quit his lucrative job to open Amazon.com, a virtual bookstore that became one of the internet's biggest success stories. In 2013, Bezos purchased The Washington Post in a $250 million deal. His successful business ventures have made him one of the richest people in the world.

Jeff Bezos was born on January 12, 1964, in Albuquerque, New Mexico, to a teenage mother, Jacklyn Gise Jorgensen, and his biological father, Ted Jorgensen. The Jorgensens were married less than a year, and when Bezos was 4 years old his mother re-married, to Cuban immigrant Mike Bezos.

As a child, Jeff Bezos showed an early interest in how things work, turning his parents' garage into a laboratory and rigging electrical contraptions around his house. He moved to Miami with his family as a teenager, where he developed a love for computers and graduated valedictorian of his high school. It was during high school that he started his first business, the Dream Institute, an educational summer camp for fourth, fifth and sixth graders.

While his career in finance was extremely lucrative, Bezos chose to make a risky move into the nascent world of e-commerce. He quit his job in 1994, moved to Seattle and targeted the untapped potential of the internet market by opening an online bookstore.

Bezos set up the office for his fledgling company in his garage where, along with a few employees, he began developing software. They expanded operations into a two-bedroom house, equipped with three Sun Microstations, and eventually developed a test site. After inviting 300 friends to beta test the site, Bezos opened Amazon.com, named after the meandering South American River, on July 16, 1995.

The initial success of the company was meteoric. With no press promotion, Amazon.com sold books across the United States and in 45 foreign countries within 30 days. In two months, sales reached $20,000 a week, growing faster than Bezos and his start-up team had envisioned.

Amazon.com went public in 1997, leading many market analysts to question whether the company could hold its own when traditional retailers launched their own e-commerce sites. Two years later, the start-up not only kept up, but also outpaced competitors, becoming an e-commerce leader.

Bezos continued to diversify Amazon’s offerings with the sale of CDs and videos in 1998, and later clothes, electronics, toys and more through major retail partnerships. While many dot.coms of the early '90s went bust, Amazon flourished with yearly sales that jumped from $510,000 in 1995 to over $17 billion in 2011.

In 2006, Amazon.com launched its video on demand service; initially known as Amazon Unbox on TiVo, it was eventually rebranded as Amazon Instant Video. In 2007, the company released the Kindle, a handheld digital book reader that allowed users to buy, download, read and store their book selections. That same year, Bezos announced his investment in Blue Origin, a Seattle-based aerospace company that develops technologies to offer space travel to paying customers.

Bezos entered Amazon into the tablet marketplace with the unveiling of the Kindle Fire in 2011. The following September, he announced the new Kindle Fire HD, the company's next generation tablet designed to give Apple's iPad a run for its money. "We haven't built the best tablet at a certain price. We have built the best tablet at any price," Bezos said, according to ABC News.

Bezos made headlines worldwide on August 5, 2013, when he purchased The Washington Post and other publications affiliated with its parent company, The Washington Post Co., for $250 million. The deal marked the end of the four-generation reign over The Post Co. by the Graham family, which included Donald E. Graham, the company's chairman and chief executive, and his niece, Post publisher Katharine Weymouth.

"The Post could have survived under the company's ownership and been profitable for the foreseeable future," Graham stated, in an effort to explain the transaction. "But we wanted to do more than survive. I'm not saying this guarantees success, but it gives us a much greater chance of success."

In a statement to Post employees on August 5, Bezos wrote: "The values of The Post do not need changing. …There will, of course, be change at The Post over the coming years. That's essential and would have happened with or without new ownership. The internet is transforming almost every element of the news business: shortening news cycles, eroding long-reliable revenue sources, and enabling new kinds of competition, some of which bear little or no news-gathering costs. There is no map, and charting a path ahead will not be easy. We will need to invent, which means we will need to experiment. Our touchstone will be readers, understanding what they care about—government, local leaders, restaurant openings, scout troops, businesses, charities, governors, sports—and working backwards from there. I'm excited and optimistic about the opportunity for invention."

In early December 2013, Bezos made headlines when he revealed a new, experimental initiative by Amazon, called "Amazon Prime Air," using drones—remote-controlled machines that can perform an array of human tasks—to provide delivery services to customers. According to Bezos, these drones are able to carry items weighing up to five pounds, and are capable of traveling within a 10-mile distance of the company's distribution center. He also stated that Prime Air could become a reality within as little as four or five years.

Bezos oversaw one of Amazon's few major missteps when the company launched the Fire Phone in 2014; criticized for being too gimmicky, it was discontinued the following year. However, Bezos did score a victory with the development of original content through Amazon Studios. After premiering several new programs in 2013, Amazon hit it big in 2014 with the critically acclaimed Transparent and Mozart in the Jungle. In 2015, the company produced and released Spike Lee's Chi-Raq as its first original feature film.

In 2016, Bezos stepped in front of the camera for a cameo appearance playing an alien in Star Trek Beyond. A Star Trek fan since childhood, Bezos is listed as a Starfleet Official in the movie credits on IMDb.

In July 2017, Bezos briefly surpassed Microsoft founder Bill Gates to become the richest person in the world, according to Bloomberg, before dropping back to No. 2. The Amazon chief then reclaimed the top spot in October, and in January 2018, Bloomberg pegged his net worth at $105.1 billion, making him the richest person in history. Two months later, Bezos was up to $127 billion, equal to the combined wealth of 2.3 million average Americans, before continuing his surge to the $150 billion plateau in mid-July.


On January 30, 2018, Amazon, Berkshire Hathaway and JPMorgan Chase delivered a joint press release in which they announced plans to pool their resources to form a new healthcare company for their U.S. employees.

According to the release, the company will be "free from profit-making incentives and constraints" as it tries to find ways to cut costs and boost satisfaction for patients, with an

"The healthcare system is complex, and we enter into this challenge open-eyed about the degree of difficulty," said Bezos. "Hard as it might be, reducing healthcare's burden on the economy while improving outcomes for employees and their families would be worth the effort."

Not long afterward, The Seattle Times reported that more changes were afoot for Amazon, with the company consolidating its consumer retail operations in order to focus on Alexa, AWS, digital entertainment and other growing areas. An Amazon spokesperson confirmed the news, saying, "As part of our annual planning process, we are making head count adjustments across the company — small reductions in a couple of places and aggressive hiring in many others."

In April 2018, as part of his annual shareholder letter, Bezos said the company had surpassed 100 million paid subscribers for Amazon Prime. He added that 2017 had been an outstanding year for hardware sales, and that Amazon would continue to invest in expanding its customer base, brand and infrastructure.