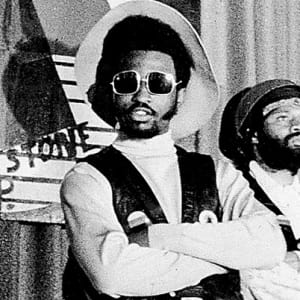 Jeff Fort is an American criminal best known as the founder and leader of the Black P. Stone Nation gang. Other crimes have included misuse of federal funds, drug trafficking and attempted terrorism.

Jeff Fort is a criminal born on February 20, 1947 in Aberdeen, Mississippi. He founded and led the Chicago gang called the Blackstone Rangers that later became Black P. Stone Nation. In 1972, Fort was convicted for misuse of federal funds for using grant money to pay gang members versus his stated intent to rehabilitate them. In prison he converted to Islam, and upon his release in 1976 he formed the El Rukn group to peddle drugs. Back in jail, he attempted to trade arms for money with the Libyan government in 1987 and was sentenced to 80 years in prison.

Infamous criminal Jeffrey Fort was born on February 20, 1947, in Aberdeen, Mississippi. Fort and his family moved to the low-income Woodlawn neighborhood in the South Side of Chicago in 1955 in order to find work. But Fort's family life disintegrated, and the grade-school dropout found himself in and out of juvenile detention centers, including the Illinois State Training School for Boys in St. Charles, Illinois. It was there that he met an older boy, Eugene Hairston, who soon became his friend and mentor.

To protect themselves on the streets, Hairston and Fort founded a group in the late 1950s called the Blackstone Rangers, named after the Blackstone Avenue area where they spent their time. Hairston earned the nickname "Bull" early on, and Fort became known as "Angel", a term of endearment given to him by his mother. The group quickly turned into a gang, as area youth afraid for their safety took membership with the Rangers. As the gang grew, so did their territory. They claimed the area east of Woodlawn Avenue as their stomping grounds, and anyone who violated this dividing line put their lives in jeopardy.

The Blackstone Rangers began absorbing other crews in the area, eventually uniting under the new name, the Black P. Stone Nation. The Stones organized themselves into a hierarchy, establishing a leadership council they called The Main 21. Jeff "Angel" Fort served as the gang's leader, with "Bull" Hairston as second-in-command. In 1966, under Bull and Angel's leadership, the Nation grew from 500 to 1,500 members. By 1967, that number had doubled to approximately 3,000 members. When Hairston went to prison in 1968 on drug charges, Fort was left to run the Nation unchallenged.

With the help of local minister Reverend John Fry, Fort learned how to garner financial support from public agencies and philanthropists. Charities such as the Ford Foundation and the Kettering Foundation donated money to the P. Stone Nation, who had by then formed a faux political charter under the name The Woodlawn Organization. The Woodlawn Organization, or T.W.O., announced plans to create jobs for reformed gang members who were struggling to make ends meet. Under President Lyndon Johnson, Fort also managed to obtain a $1 million federal grant from the Office of Economic Opportunity by claiming that he would use the money to teach job skills to gang members. Fort instead used the money to "pay" his gang members a salary that would, in turn, be given directly back to Fort.

Suspecting the misappropriation of funds, politicians hauled Fort into a U.S. Congressional Committee hearing in Washington, D.C., in order to determine how the money had been used. Only $200,000 had been given out as salaries, leaving $800,000 of the funds unaccounted for. Fort refused to testify, and was indicted for contempt of Congress. The federal grant money was revoked.

In 1972, Fort was convicted for his misuse of federal funds, and was sent to Leavenworth Penitentiary to serve five years for his crimes. During his time at Leavenworth, Fort bulked up, converted to Islam and assumed the name Imam Chief Prince Malik. After his release from prison in 1976, Fort created a new organization, named El Rukn, the loosely translated Arabic word for Black Stone. The Rukns, as they called themselves, bought a former movie theater in Chicago that served as a mosque, a party house, and private business headquarters. They called it The Fort.

But police believed Fort was actually using his newly formed group to peddle drugs—specifically cocaine and heroin. Using the money they accrued from their illegal holdings, Fort and the Rukns bought property around the area to lease to family, friends, prostitutes and drug dealers. At the height of their reign, the Rukns housed more than 300 families.

In 1983, police used information from an informant to track the Rukn's illegal dealings down to Mississippi. Two of Fort's lieutenants were arrested for trafficking, and a wiretap revealed Jeff Fort discussing his drug deals. In November of 1983, Fort was convicted of drug trafficking charges and sentenced to 13 years in prison. He was sent to Terre Haute, Indiana, to serve his sentence and was then transferred to the Federal Correctional Institution at Bastrop, Texas. In Bastrop, Fort was able to lead El Rukn through coded telephone calls from prison. Police monitored the calls, and discovered that Fort was working with Muammar Abu Minyar al-Gaddafi and the Libyan government on an arms deal. The gang agreed to trade rockets and a promise to commit terrorist acts in the U.S. in exchange for a $2.5 million loan.

In a 1987 sting by police, Fort and his men were caught trying to make the deal. From prison, Fort was tried and convicted for conspiring with Libya to perform acts of terrorism. He was sentenced to 80 years in prison in Marion, Illinois.

In 1988, Fort was also convicted of ordering the 1981 murder of a rival gang leader. He was sentenced to an additional 75 years in prison. He was transferred to a penitentiary in Florence, Colorado in 2006. He continues to serve his sentence.