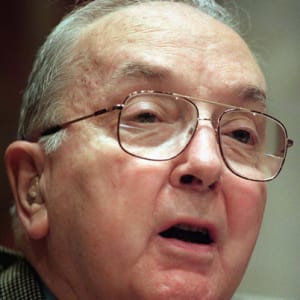 Republican, Jesse Helms was a United States Senator from North Carolina who served for five terms (1973-2003). He was known for his right-wing politics and opposition to civil rights legislation.

Jesse Helms was born on October 18, 1921, in Monroe, North Carolina. He attended Wingate and Wake Forest Universities and got his start in politics working on the senatorial campaign of Democrat, Willis Smith. Helms was elected to the one of North Carolina's Senate seats in 1972 served until 2003, developing a reputation as a strong right-leaning Republican conservative who consistently opposed civil rights legislation. He died in 2008.

Politician, former senator. Born on October 18, 1921, in Monroe, North Carolina One of the best known conservatives in the Republican Party, Jesse Helms served as a senator from North Carolina for 30 years. He is widely remembered for his staunch opposition to any policy, law, or nominee that conflicted with his right-wing beliefs, earning him the nickname “Senator No.” The son of a police chief, Helms grew up in North Carolina. After attending Wingate University and Wake Forest University, he went to work for a Raleigh newspaper as a sports reporter.

Helms served in the U.S. Navy during World War II. He returned to Raleigh after being discharged from the military in 1945. In 1950, Helms got his first taste of politics working on the senatorial campaign of Willis Smith, a Democrat. After Smith was elected, Helms joined his staff in Washington, D.C., as an administrative assistant. He stayed on briefly in Washington after Smith's death to work with his replacement, Senator Alton Lennon.

Election to the U.S. Senate

Returning to North Carolina, Helms worked in broadcasting in various capacities, including as a commentator, and served as a lobbyist for the banking industry. In 1972, he made his first run for public office, seeking one of North Carolina's Senate seats. Once elected, Helms became one of the legislature's most conservative voices. Over the years, he firmly supported the death penalty, military spending, and school prayer and strongly opposed abortion, welfare, and arms control.

Serving on the Senate Foreign Relations Committee, Helms pushed his anti-communist and anti-arms control agenda. To fight communism, he supported a number of restrictive regimes, including Chile's Augusto Pinochet. Helms also opposed the United Nations and successfully blocked the ratification of the UN Treaty Against Genocide in 1984.

Domestically, Jesse Helms fought against government spending and many social programs. In 1989, he started a firestorm of debate over funding for the arts. His ire was provoked by photographs by controversial artists Robert Mapplethorpe and Andres Serrano were displayed in exhibits funded by National Endowment for the Arts (NEA), a federal agency. He unsuccessfully tried to pass a bill against federal funds being used to support "obscene" art.

An ally of such evangelists as Pat Robertson and Jerry Falwell, Helms was an early leader of the Christian conservative movement. As it is expressed on his website, "he held firm to his dedication to uphold the traditional moral values that are embraced by most Americans." But critics have often cited him for his poor track record on civil rights and race relations in general. Helms fought against busing for school integration and opposed creating the Martin Luther King Jr. holiday.

Race figured prominently in Helms's 1990 and 1996 re-election campaigns against Harvey Gantt, a former mayor of Charlotte and an African American. Some of his advertisements featured language and imagery to play on some white people's concerns about affirmative action. His 1996 campaign was also cited by the U.S. Department of Justice for violating civil rights and voting laws.

Not long after being elected to his fifth consecutive term in 1996, Helms began to experience some health problems. He had knee replacement surgery in 1998 and successfully battled prostate cancer as well as a rare bone disease. In January 2002, Helms announced his retirement from the Senate and had surgery to replace a valve in his heart a few months later.

In 2005, Helms provided admirers and detractors with an inside look into his life with his autobiography, Here's Where I Stand. In the book, he stated that he was "not the least bit racist"; and took aim at the news media, saying that it does not support traditional values.