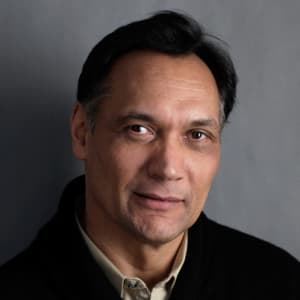 Jimmy Smits is an Emmy Award-winning actor of Puerto Rican and Dutch descent. He starred in the Steven Bochco TV dramas ‘L.A. Law’ and ‘NYPD Blue.’

Jimmy Smits was born July 9, 1955, in Brooklyn, New York, to Puerto Rican and Dutch parents. He became famous for his role on the TV series L.A. Law, for which he earned an Emmy Award. Smits acted in several films, but he didn't rediscover success until returning to the small screen on the gritty police drama NYPD Blue. Smits has since appeared on such hit shows as The West Wing, Dexter and Sons of Anarchy.

Actor. Born July 9, 1955, in Brooklyn, New York. Smits was the eldest of three children born to Emelina and Cornelis Smits. A second generation American of mixed ancestry (his mother was Puerto Rican and his father was Dutch), Smits was raised primarily in Brooklyn. He attended Thomas Jefferson High School, where he was both an athlete and actor of considerable talent. He went on to study at Brooklyn College, and earned his MFA in theater from Cornell University in 1982.

In the early 1980s, Smits toured the U.S. in repertory and off-Broadway productions. After considerable stage success, he was cast in several movie and TV projects, most notably the two-hour pilot for Miami Vice (1984), in which he was featured as Don Johnson's ill-fated partner.

In 1986, Smits landed his first big screen role as a drug dealer in Running Scared. Later that year, he found his niche in television when he was signed to play attorney Victor Sifuentes on the weekly series L.A. Law. During his five-plus seasons on the show, the courtroom drama was a critical and commercial success. Smits earned an Emmy Award for Outstanding Supporting Actor in a Drama Series in 1990, along the way cultivating his image as an Hispanic heartthrob with his character.

While working on L.A. Law, Smits segued onto the big screen, starring in Old Gringo (1989) opposite Jane Fonda and Gregory Peck. Although his performance as General Arroyo was recognized, the film inspired little interest in moviegoers.

Smits left L.A. Law in 1991 (though he returned for guest spots), shelving his TV career to wholeheartedly pursue a film career. However, like so many other silver screen hopefuls, his efforts met with limited success. In 1992, he returned to the small screen in the documentary The Broken Cord. The following year, he appeared in Stephen King's The Tommyknockers (1993), which marked his first performance in a TV miniseries.

'NYPD Blue' and Other Roles

Later that year, the producers of the gritty police drama NYPD Blue offered Smits the series' lead role (after David Caruso's departure). Smits accepted the part, which reunited him with L.A. Law producer Steven Bochco. In the fall of 1994, he debuted on NYPD Blue as detective Bobby Simone, winning the hearts of a skeptical audience. He remained with the show until 1998, delivering a heart-wrenching performance in his final episode. During his run on the show, Smits earned five Emmy nominations, as well as the 1995 Golden Globe for Best Actor in a Drama Series.

While working on NYPD Blue, Smits attracted further attention with a lead role in the Latino film My Family (1995), alongside Edward James Olmos and a young Jennifer Lopez.

Smits continued to pursue film roles, appearing in the thriller The Million Dollar Hotel (2000) with Mel Gibson and Milla Jovovich. Despite an impressive cast, the film, which debuted at the Berlin Film Festival, failed to attract a wide audience in America. Later that year, he headlined the boxing drama Price of Glory and the supernatural thriller Bless the Child, opposite Kim Basinger. Smits also appeared in two Star Wars films: Attack of the Clones (2002) and Revenge of the Sith (2005).

Smits returned to television in 2004 as congressman and presidential hopeful Matthew Santos on the critically acclaimed The West Wing. After the show ended in 2006, he headlined the short-lived drama Cane, and enjoyed a prominent role in Season 3 of Dexter. Beginning in 2012, Smits became a regular on the FX drama Sons of Anarchy, earning acclaim for his portrayal of "companionator" Nero Padilla.

In 1981, Smits married his high school sweetheart, Barbara. The couple had two children together before they divorced in 1987. He lives with long-time companion and fellow actress Wanda De Jesus.

On a personal level, Smits remains passionately committed to the Latino community. Along with comedian Paul Rodriguez and Jennifer Lopez, he invested in The Conga Room, a Los Angeles dance club which serves as a vehicle for Latino music. In 1997 he co-founded The National Hispanic Foundation for the Arts, an organization that promotes Hispanic talent in the media and entertainment industries. He has won three American Latino Media Arts Awards, and was honored with the Ackerman Leadership Award in 2015 for his community work.