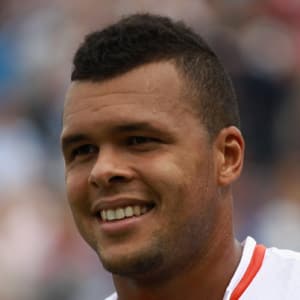 Jo-Wilfried Tsonga was born on April 17, 1985, in Le Mans, France. After turning professional in 2004, he surprised the tennis world by beating Rafael Nadal to reach

the final of the 2008 Australian Open. The powerful Frenchman has also defeated top players to advance to the semifinal round of the French Open and Wimbledon.

Tsonga began playing tennis at a young age, and was quickly acknowledged as an advanced player; in 2004, he turned pro. According to the Association of Tennis Professionals, Tsonga attributes his strength to his father, and his kindness to his mother.

Tsonga took the tennis world by surprise in 2008, when, as an unseeded player, he defeated Rafael Nadal in the semifinals of the Australian Open. That same year, he won the Paris Masters, and broke into the Top 10 with two titles.

Among several career highlights, Tsonga made it to the semifinals of the 2010 Australian Open, and defeated tennis icon Roger Federer in the quarterfinals of Wimbledon

in 2011 and the 2013 French Open. He finished the 2014 season on a high note, defeating four straight players ranked in the Top 10 to claim his second Masters title. Tsonga then delivered a strong showing at the 2015 French Open, advancing to the semifinals before losing to Switzerland's Stan Wawrinka.