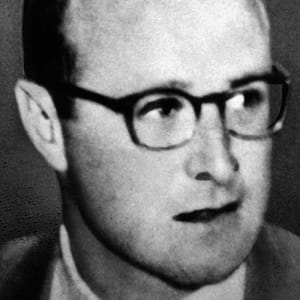 Joe Gargan, a lawyer and cousin of Senator Ted Kennedy, was prominently involved in the infamous Chappaquiddick incident of 1969.

Who Was Joe Gargan?


Born in Boston, Massachussets, in 1930, Joe Gargan was related to the Kennedy political family through his mother's side. He developed a close friendship with cousin Ted Kennedy while growing up, and later worked on political campaigns for Ted, John and Robert Kennedy. Gargan hosted the July 1969 party at Chappaquiddick Island, where Ted Kennedy was last seen with a former staff member before instigating the car accident that led to her death. Gargan remained mostly silent on the experience, though he emerged for an account of events that appeared in a 1988 best-selling book. He died in December 2017 in Virginia, months before the widespread release of the Chappaquiddick movie that returned the notorious incident to headlines.


After making waves at the 2017 Toronto International Film Festival, Chappaquiddick earned its widespread release the following April. The film tells the tale of the 1969 incident in which Senator Ted Kennedy drove into a pond, leading to the death of passenger Mary Jo Kopechne, and the ensuing attempt to contain the political and emotional fallout of the accident. The film stars Jason Clarke as Kennedy, Kate Mara as Kopechne and Ed Helms as Gargan, the Kennedy insider who serves as the voice of reason as things threaten to spin out of control.


On July 18, 1969, Gargan hosted a cookout with Ted Kennedy at a rented cottage on Chappaquiddick Island, Massachusetts. The gathering served as a reunion for the "Boiler Room Girls," the female staffers who worked on Robert Kennedy's presidential campaign before his assassination the previous June.

Sometime after 11 p.m., Kennedy left the party with 28-year-old Mary Jo Kopechne, who was in the passenger seat when the senator made a sharp turn onto an unlit, unpaved road, missed the ramp to a small bridge and plunged the car into Poucha Pond. Kennedy was able to free himself, but Kopechne was trapped underwater; after attempting to pull her out, he staggered back to the party and told two confidantes, Gargan and Paul Markham, what happened.

The three then drove to the accident scene, where Gargan and Markham also tried to open the submerged car, their efforts hindered by the darkness and strong current. They argued about what to do as they drove to the island ferry landing, where Kennedy surprised them by diving into the water to swim to his hotel in Edgartown, on the mainland. The accident went unreported by all three men, until Kennedy finally did so at the Edgartown police station at around 10 a.m. the following morning, far too late to save Kopechne.

Kennedy managed to escape any real punishment for his involvement in the accident, getting off with a two-month suspended jail sentence and a year's suspension of his driver's license. The incident was said to have torpedoed his chances of becoming president, though he continued to serve in the Senate for another four decades.

Connection to the Kennedys


Gargan's mother, Agnes, was the younger sister of Rose Fitzgerald Kennedy, matriarch of the famed 20th century political family. Gargan spent the first of his summers at the Kennedy family home in Hyannis Port in 1940, where he grew close to cousin Teddy, two years his junior.

Joey Gargan capably fit in with the competitive, ambitious Kennedys: He learned to ride horses at a young age, and became highly adept at sailing. Athletic enough to play football at Georgetown Preparatory School, he often starred in the clan's backyard touch football games.


Gargan learned the ropes of campaign work by helping out on John F. Kennedy's successful run for the U.S. Senate in 1952.

After passing the Massachusetts bar in 1956, Gargan became a trial lawyer for the firm of Badger, Pratt, Doyle & Badger. However, he was swallowed up by the John Kennedy presidential campaign of 1960, for which he served as an "advance man," and was also tapped for Ted Kennedy's Senate campaigns in 1962 and '64.

In the meantime, Gargan became first assistant U.S. Attorney for the District of Massachusetts in 1961. He returned to Badger, Pratt, Doyle & Badger later in the decade, but again was called to family political service and took over as chairman of Robert Kennedy's 1968 presidential campaign.

In the aftermath of the second Kennedy assassination, the tide turned toward Ted, the youngest member of the political dynasty, as a possible presidential candidate for 1972. Gargan accompanied his cousin for public appearances, likely in preparation for another important campaign role.

Speaking Out In 'Senatorial Privilege'


After remaining silent on the incident for years, Gargan opened up to reporter Leo Damore in the 1980s, his accounts becoming a major component of Damore's 1988 book, Senatorial Privilege: The Chappaquiddick Cover-Up. According to Gargan, Kennedy was unwilling to take responsibility for the accident in its aftermath, suggesting they concoct a story in which Kopechne was driving by herself and later "discovered" in the pond, and another one in which Gargan was the driver.

Rejecting those ideas, Gargan stressed that they needed to go to the police immediately. At the ferry landing, Kennedy barked that he would "take care of it" before jumping into the water, which Gargan interpreted as an indication the senator would report the accident, as advised. However, when Gargan and Markham arrived at Kennedy's hotel after a night of little sleep, they were surprised to find the senator, casually chatting with other guests, had still not informed authorities.

Senatorial Privilege became a best seller and inspired the foreman of the grand jury convened to deliberate on the incident, in 1970, to come forward with the story of how the jurors were denied access to witnesses and essentially bullied into remaining silent. Ultimately, no new charges arose from the revelations, and many questions about the events of the tragic night remained unanswered.

Joseph Francis Gargan was born on February 16, 1930, in Boston, Massachusetts. He was the first of three children born to Joseph Sr., a lawyer and decorated former U.S. Marine, and Agnes Fitzgerald Gargan.

Just six years old when his mother died from an embolism in 1936, Gargan spent many of his formative years with his Uncle Bill and Aunt Ann in Lowell, outside of Boston. He saw his father more frequently after enrolling at Georgetown Prep in Maryland, close to where the elder Gargan was assisting Undersecretary of War Robert Patterson in the nation's capital. However, Joey soon lost his father to a heart attack, becoming an orphan at 16.

Joey Gargan followed in his dad's footsteps by attending Notre Dame, earning his undergraduate degree in 1952 and his law degree three years later.


While a student at Notre Dame, Gargan met an Indiana girl named Betty Hurstel, who worked at the university's graduate school. They married in 1955 and went on to have three children, Terry, Joe and Tom, and two grandchildren.


After the life-changing incident, Gargan served as vice president of Merchant's Bank in Hyannis. He went on to found the law firm Gargan, Harrington, Markham & Wall, along with his old Chappaquiddick connection Paul Markham, and later joined the Massachusetts Board of Appeal, before retiring in 2013.

Gargan died of natural causes on December 12, 2017, in Lansdowne, Virginia, months before the release of Chappaquiddick returned the issue to headlines. Other than a paid death notice in the Boston Globe, there was little mention of the man who played a central role in one of the more notorious and mysterious public events of the past 50 years.