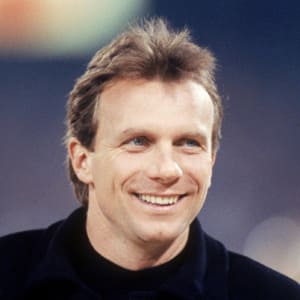 Professional football player Joe Montana led the 49ers to victories in four Super Bowls, including consecutive wins in 1989 and 1990.

Joe Montana was born June 11, 1956, in New Eagle, Pennsylvania. He was selected late in the third round of the 1979 draft by San Francisco 49ers coach Bill Walsh and went on to lead the 49ers to victories in four Super Bowls, including consecutive wins in 1989 and 1990. He joined the Kansas City Chiefs in 1993 before retiring. He was inducted into the Pro Football Hall of Fame in 2000.

Football player Joseph Clifford Montana was born on June 11, 1956, in New Eagle, Pennsylvania. A talented multi-sport athlete at Ringgold High School, he was offered a scholarship to play basketball at North Carolina State University before enrolling at the University of Notre Dame to play football.

At one point a seventh-string quarterback for the Fighting Irish, Montana eventually took over the starting job and led the team to the 1977 national championship. After fighting off the flu to spark a comeback win over the University of Houston at the 1979 Cotton Bowl, he was selected in the third round of that year's National Football League draft by the San Francisco 49ers.

Installed as a starter toward the end of his second season, Montana proved an accurate quarterback with an ability to scramble to keep plays alive and remain calm in important moments. The signature play of his early career came at the end of the 1981 NFC Championship Game, when he lofted a pass to a leaping Dwight Clark in the back of the end zone for the winning score. Two weeks later, he was named MVP of San Francisco's 26-21 win over the Cincinnati Bengals in Super Bowl XVI.

With Montana and wide receiver Jerry Rice spearheading coach Bill Walsh's West Coast offense, the 49ers became the dominant NFL team of the 1980s. They claimed seven NFC West titles during the decade and won Super Bowls XIX, XXIII and XXIV, with Montana earning game MVP honors in two of those victories. Most famously, "Joe Cool" shrugged off the mounting pressure of a fourth-quarter deficit against the Bengals in his third Super Bowl, driving his offense 92 yards for the winning touchdown with less than a minute to play.

Montana guided the 49ers to a 14-2 record in 1990, but he was knocked out of the team's loss to the New York Giants in the NFC Championship Game, and injuries kept him out for nearly all of the following two seasons. By the time he was fully healthy, the 49ers had talented quarterback Steve Young already in place and were ready to cut ties with the player who had carried the team to its greatest heights. In April 1993, they traded Montana to the Kansas City Chiefs.

The veteran quarterback showed he still had the golden touch by leading the Chiefs to their first division title in 22 years and the 1993 AFC Championship Game. After one more solid season, which ended with a loss to the Miami Dolphins in a 1994 Wild Card playoff game, Montana announced his retirement. Over the course of his career, the four-time Super Bowl champion was twice named the Associated Press MVP and earned eight Pro Bowl selections. In addition, he retired with NFL playoff records for completions, yards and touchdowns.

Montana was easily inducted into the Pro Football Hall of Fame in 2000, his first year of eligibility. Arguably the best quarterback in history, he ranked fourth in a list of the game's all-time top 100 players compiled by the NFL Network in 2010.

The football legend mainly kept a low profile after leaving the game. A food and wine aficionado, he owned an estate in Northern California wine country for several years, an area that offered plenty of trails for horseriding.

Montana and his wife, Jennifer, have four children: Alexandra, Elizabeth, Nathaniel and Nicholas. The youngest two both played football for Division I collegiate programs.